The Financial Crimes Enforcement Network (FinCEN), part of the US Department of Treasury, has fined the operator of a peer-to-peer cryptocurrency trading service $35,350 USD and barred him from money-transmitting, “for willfully violating the Bank Secrecy Act’s (BSA) registration, program, and reporting requirements.”

In a release announcing the fine, FinCEN claims Eric Powers, “conducted over 200 transactions involving the physical transfer of more than $10,000 in currency, yet failed to file a single CTR (Currency Transaction Report).”

As part of these transactions, FinCEN says Powers processed more than $5 million USD in Bitcoins without reporting the events.

Powers appears to have been an independent operator without employees, regarding which FinCEN Director Kenneth A. Blanco stated:

“Obligations under the BSA apply to money transmitters regardless of their size…It should not come as a surprise that we will take enforcement action based on what we have publicly stated since our March 2013 Guidance—that exchangers of convertible virtual currency, such as Mr. Powers, are money transmitters and must register as MSBs.”

FinCEN says they found evidence Powers, “conducted approximately 160 purchases of Bitcoin for approximately $5 million through in-person cash transactions, conducted in public places such as coffee shops, with an individual identified through a bitcoin forum.”

Many cryptocurrency enthusiasts are young, inexperienced and/or not completely aware of or sensitive to the social implications of illicit money transmitting and laws pertaining to these activities.

Crypto enthusiasts also often regard themselves as healthily anti-establishmentarian and pro-privacy. 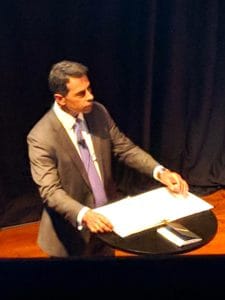 But FinCEN claims Powers was in fact aware of his reporting obligations, rules he flouted anyway:

“In fact, there were indications that Mr. Powers specifically was aware of these obligations, but willfully failed to honor them.  Such failures put our financial system and national security at risk and jeopardize the safety and well-being of our people, as well as undercut responsible innovation in the financial services space.”

In the Assessment of Civil Money Penalty, FinCEN states that it, “considered penalties, sanctions, and remedies imposed on Mr. Powers by other state or federal agencies, including civil or criminal forfeitures imposed in the amount of $100,000 and 237.53575 bitcoin…FinCEN also considered the extensive cooperation provided by Mr. Powers with FinCEN’s investigation.”

Powers has also reportedly agreed to, “an industry bar that would prohibit him from providing money transmission services or engaging in any other activity that would make him a ‘money services business’ for purposes of FinCEN regulations.”