“The UK is now a Fintech powerhouse.” 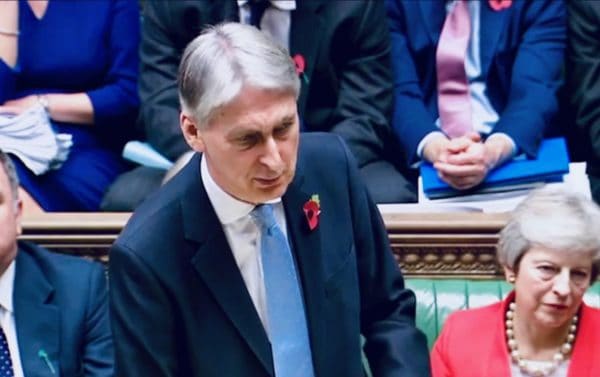 Chancellor of the Exchequer Philip Hammond made an appearance at UK Fintech Week today to address Fintech innovation in the United Kingdom.

Noting that the City of London has always driven innovation and change, Hammond pointed to the first ever banknote issued (Bank of England in 1695) and the first ever ATM (1967).

So how does he feel about the change in the financial services sector? Hammond believes that the UK is the “perfect location for Fintech to thrive, even as [they] leave the European Union.”

Calling the UK a Fintech powerhouse, Hammond said that last year UK Fintech’s raised a record £15 billion or “one in every six pounds invested in Fintech around the world,” – double the funding of Germany.

The sector employs over 76,000 people and holds an estimated worth of £7 billion – significant for a country with a population of around 66 million. Nearly 50% of the UK  population utilizes Fintech services – far above the rest of the world. The UK Fintech regulatory Sandbox has “led the way” as innovation supporting global regulators have copied the concept. The UK’s Open Banking initiative is dramatically changing the way consumers and small businesses engage with financial services. Additionally, the UK has created a “Regulators’ Pioneer Fund” to innovate in other areas of regulation – or Regtech.

But as the UK  Fintech ecosystem continues to thrive, the Chancellor cautions this is no reason to become complacent as competing nations seek to challenge the UK’s prominence.

So how does the UK maintain its relevance in the Fintech industry while Brexit adds more challenges to the competitive environment? Hammond had this to say:

“I’m confident of the good faith of both sides in those discussions …and that we will, one way or another, reach a resolution [with Brexit], that will enable the deal to get through Parliament…so we can stop talking about Brexit…and get on with the business of business. And when we do, all the pieces are in place for the Fintech sector to thrive in the UK. We have the time zone, the language, the legal system, and the talent. Our world-class universities have pioneered many of history’s breakthrough inventions and discoveries… and with just 4% of the world’s researchers, we manage 15% of the world’s most-cited articles…and more Nobel Prizes than any country apart from the US.”

all the pieces are in place for the #Fintech sector to thrive in the UK. We have the time zone, the language, the legal system, and the talent Click to Tweet

In closing his speech, Hammond announced the creation of a new Fintech Alliance – “bringing together the UK’s Fintech network in one easily accessible “digital marketplace.” This network will provide access to people, firms, and information, including connections to investors and regulatory updates to help create a more cohesive ecosystem.

Committed to the creation of the most “pro-growth and pro-innovation regulatory environment in the financial services world,”  Hammond believes that, when it comes to Fintech in the UK, the sky is the limit as they enter the next stage of the Fintech revolution.