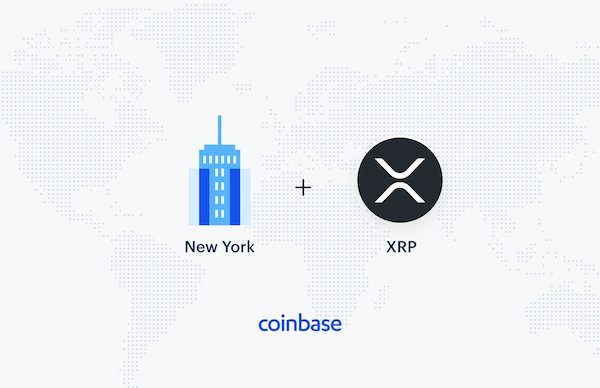 Cryptocurrency exchange Coinbase announced on Monday it has launched trading support for XRP for New York state residents. The announcement was made through the platform’s Twitter account. The tweet revealed:

XRP (XRP) is now available to Coinbase users who are New York residents. New Yorkers can now log in to buy, sell, convert, send, receive, or store XRP on https://t.co/bCG11KMQ6s or using our iOS and Android apps.https://t.co/5VE1WklrWo pic.twitter.com/Zp5odgaoHs

The launch of XRP in New York comes just a couple of months after Coinbase reported it is now supporting XRP on its cryptocurrency platform, as well as its Android and iOS mobile apps, and it was accepting inbound transfers of XRP to its Coinbase Pro service. The platform stated at the time that customers may now buy, sell, convert, send, receive, or store XRP. Inbound transfers and many sends require the specification of an XRP destination tag. At that time, XRP was available for customers in most jurisdictions but was not initially be available for residents of the UK or the state of New York. Coinbase then shared:

“XRP is the cryptocurrency used by the XRP ledger, which supports international currency exchange and remittances. The ledger is powered by a network of peer-to-peer servers. All accounts on this network can send or receive XRP to/from each other, while XRP can be used to send underlying fiat currencies between two parties. In this way, XRP can function as a bridge currency in transactions involving different currencies such as US dollars, Japanese yen, Euros, Francs, and others in use on the XRP network.”