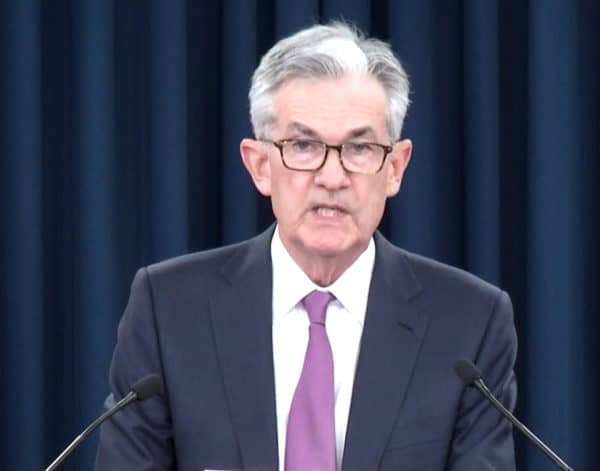 Following today’s FOMC meeting where the US Federal Reserve announced no change in interest rates at this time, Fed Chair Jerome Powell was asked a question about crypto.

In the Q&A session that typically accompanies the FOMC statement, one reporter asked Powell if he was concerned about Facebook’s just announced cryptocurrency – Libra and if such a crypto could undermine the Fed. Powell had this to say:

Powell said he was not too concerned about central banks not being able to carry out their monetary policy in light of crypto.

“Facebook, I believe, has made quite broad rounds around the world with regulators, with supervisors, and with lots of people to discuss their plans. And that certainly includes us,” said Powell. “It’s something we are looking at. We meet with a broad range of private sector firms all of the time on financial technology [Fintech], and there is just a tremendous amount of innovation going on out there.”

Facebook, I believe, has made quite broad rounds around the world with regulators, with supervisors, and with lots of people to discuss their plans. And that certainly includes us @Libra_ @FederalReserve Click to Tweet

“I would echo what Governor Carney said [Bank of England], we will end up having quite high expectations from a safety and soundness and regulatory standpoint if they do decide to go forward with something.”

Powell emphasized the fact they do not have “plenary authority” over regulating cryptocurrency. But they do play into their world of consumer protection – including money laundering.

“Through international forums, we have significant input into the payment system.”

Perhaps the most interesting comment was the fact that Facebook took the time to meet with the Fed in advance of the Libra announcement.