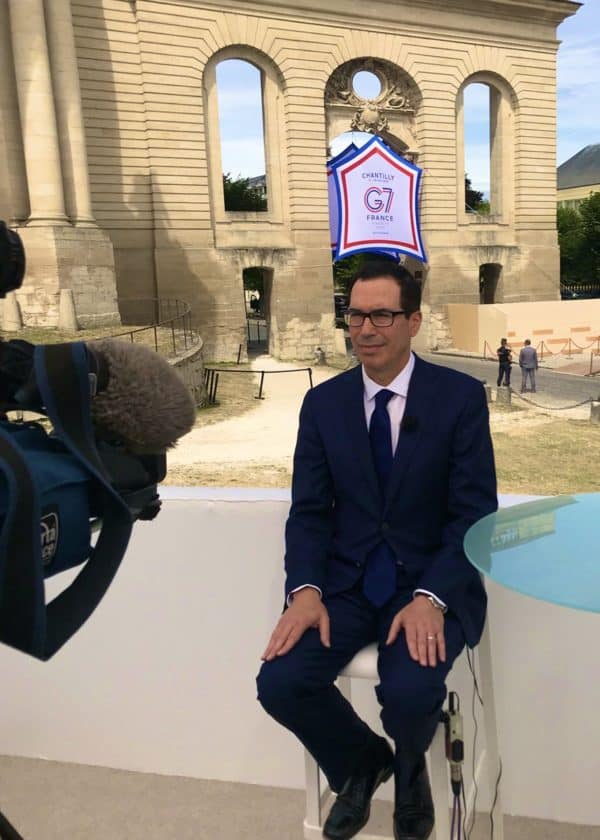 Speaking from outside G7 meetings being held in Chantilly, France, on Thursday, US Secretary of the Treasury, Steve Mnuchin, elaborated on his government’s recently expressed sentiments towards Facebook’s Libra and cryptocurrencies in general.

“Anybody in the US that touches a Bitcoin is responsible for (enforcing) money laundering (regulations) and will be held accountable,” Mnuchin told interviewers on CNBC’s Squawk box.

“I think that the (blockchain) technology has certain uses, (but) I want to be careful that anybody who’s using Bitcoin — regardless of what the price is — is using it for proper purposes and not illicit purposes…” he added.

Joined @SquawkCNBC from #G7Finance in France to discuss trade, cryptocurrency, and the thriving U.S. economy. pic.twitter.com/XGixZvsJ5E

Mnuchin said that fellow G7 representatives are more or less on the same page and cautious about Libra and crypto:

“There was a clear agreement today at from all the G7 finance ministers and central bank governor’s that Libra in particular raises some very significant concerns, and cryptocurrencies more broadly…they are money laundering issues, there’s financial stability issues, there’s consumer protection issues, these are complicated issues and its all of our jobs to protect the financial systems…”

“We’re going to make sure that bitcoin doesn’t become the equivalent of Swiss-numbered bank accounts, which were obviously a risk to the financial system.”

Mnuchin reiterated that regulators will hold digital firms to the same standards as traditional banks:

Mnuchin stopped short of saying that Libra will never happen, but hinted at complexities:

“If (Libra)…is regulated, including financial stability issues, that may or may not be something that we get comfortable with. And Libra is supposed to be a stable coin, and I say supposed to…individuals do not have (direct) claims on the coins…and that creates issues.”

Thanked @BrunoLeMaire for the generous hospitality extended to the attendees of the #G7France. We discussed international taxation, as well as a number of national security issues. pic.twitter.com/3UhhQg8SYf