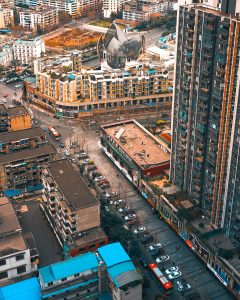 Zhan, an electrical engineer, and Wu, a Beijing tech entrepreneur, co-founded Bitmain in 2013.

As one of the first companies to make ultra-fast microchips for the industrial mining of cryptocurrencies, Bitmain quickly established a majority market share in the new sector. The company’s advent more or obsolesced “dorm room bitcoin mining” and turned cryptomining from a nerd’s obsession to a global arms race.

Like many other crypto entities, Bitmain profited enormously during the near-vertical Bitcoin bull run of late 2017, when the price of one bitcoin teetered shot up to $20 000 USD before falling off a cliff in subsequent months. Wu and Zhan both became multi-billionaires.

Many were still sanguine as prices fell in early 2018. The phenomenon was painted as a healthy correction that would make prices more attractive to the institutions everyone hoped would take crypto mainstream.

But a substantial cavalcade of institutional interest in crypto has failed to materialize in the past two years, and the prices of cryptocurrencies have many times hovered close to the cost of producing them. Some estimates indicate it costs $5000 USD to “mine” one Bitcoin, and the coins are lately selling for around $7000 USD. Sure thing profitability has lately vanished from cryptomining.

Some say that, after issuing them, Wu and Bitcoin Cash partner Roger Ver spent their own money buying Bitcoin Cash tokens to prop up markets. A marketing war between Bitcoin and Bitcoin Cash supporters was also maintained, and by the time all the dust settled, Wu was half as wealthy as Zhan, who stayed out of it.

In the meantime, the South China Morning Post reports, filings submitted by Bitmain competitor Canaan as part of a bid to go public in New York indicate that the company gained a 7% market share last year (from 15% to 22%).

While it is not clear that this share was taken from Bitmain, it is clear that Bitmain didn’t accumulate this share, despite apparent advantages.

A power struggle that took place at Bitmain may also have taken a toll.

In the latter half of 2018, Bitmain and Canaan both tried to IPO in Hong Kong but were denied.

In both cases, regulators doubted whether cryptomining has much future.

Any entity not obliged to use it would rather not, and enterprise fans of “digital assets” and the like have been working for years on alternatives.

In the case of Bitmain, regulators also wondered whether the company had the chops to successfully pull off espoused plans to focus operations on the manufacture of chips for AI (artificial intelligence).

Moving Bitmain into AI appears to have been Zhan’s idea, and, with this vision, Zhan took the reins at Bitmain in March of this year.

But Zhan only made it to October. That is when Wu announced Zhan’s resignation and forbid Bitmain employees from communicating with him.

The meeting took place in Chengdu, the capital of China’s Sichuan province, where many of the country’s cryptomines are concentrated.

At the meeting, Wu reportedly brought back Fan Xiaojun, a veteran sales chief at Bitmain expelled by Zhan. Wu also announced he was restoring the company’s head of human resources, also been replaced by Zhan.

As a slide from the presentation announced in the background,”The Bitmain you are familiar with is back,” Wu announced that Bitmain plans to allow bulk purchases of Bitmain cryptomining rigs for just 20% down.