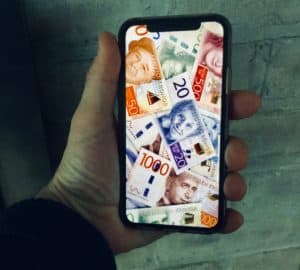 The central bank of Sweden, the Riksbank, is responsible for promoting the development and maintenance of an efficient and secure payment system. The reserve bank acknowledges that this task may become more challenging if cash is no longer widely accepted as a means of payment by most people and organizations in the $540 billion economy.

The Riksbank says it must consider which specific role it should adopt in “an evermore digital world.” The bank launched a project in 2017 that looked into the scope for the Riksbank to introduce a central bank digital currency (CBDC), referred to as the “e-krona.”

An e-krona could potentially give Sweden’s residents access to a digital complement to fiat cash, where the nation’s government would “guarantee the value of the money,” the Riksbank states. Currently, the central bank only provides financial institutions and other RIX participants in digital money.

The institution explains that the “other digital money in society is private bank money issued by commercial banks.”

Sweden’s digital currency project has looked into the need or demand for an e-krona. The project’s assigned team has reportedly held discussions with national and international agencies to get their take on a potential e-krona. Riksbank has examined proposals for various technologies and looked into the relevant legal issues that must be addressed in order to ensure the Riksbank has “a clear mandate” to introduce an e-krona.

So far, the e-Krona project has published two reports (available here and here).

The Riksbank reveals that it has implemented “a public procurement of a technology supplier to the e-krona pilot project.” The bank is planning to work with consulting firm Accenture on the project.

The bank says it will continue to look into “whether and if so how an e-krona would affect Swedish legislation and the Riksbank’s task.” The institution will also continue to “investigate the need for and effects of an e-krona on the Swedish economy.”

The reserve bank says that the question of whether the country should launch a state-backed digital krona is “one that will affect the whole of society.”

The bank has submitted a proposal to the Riksdag, the nation’s parliament. It notes that the need or demand for an electronic krona should be examined by experts in different fields.

“The Riksbank proposes a review of the concept of legal tender. The Riksdag agrees with the Riksbank that an inquiry is needed. A dialogue with the general public, payment market participants and other central agencies will be important in the Riksbank’s continued work.”

At present, there is no decision on whether or not to introduce a national digital currency, however, the Riksbank will consider the “possibilities for issuing an e-krona to increase competence and in this way be better prepared to meet a new digital payment market.”