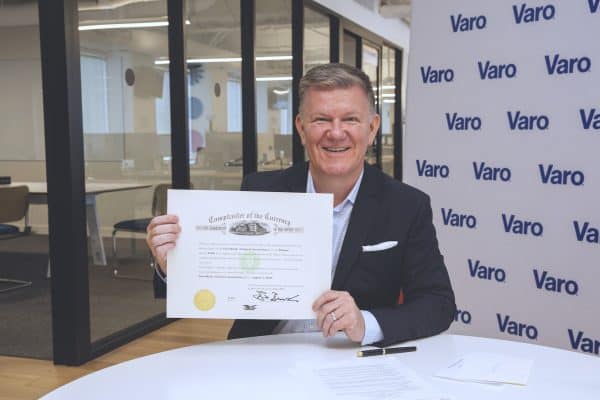 Last week, Acting Comptroller of the Currency Brian P. Brooks virtually presented Varo Bank, N.A. its official charter. Varo Money has been in business for years having provided bank services by partnering with an already chartered bank. As of August 1st, 2020, Varo Bank can go it alone representing the first consumer Fintech in US history to receive a full bank charter.

“It is a great honor to present Varo Bank its full-service national bank charter. For more than 157 years, national bank charters have signified to the world that this bank meets our high standards necessary for it to operate across the country under a single, uniform regulatory framework, subject to a single primary prudential supervisor. National bank charters inspire confidence because they are accompanied by value-added supervision and access to world-class experts. A national bank charter is both a privilege, which Varo has earned, and a responsibility, which it has embraced.

Varo Bank’s opening on August 1, 2020, represents the evolution of banking and a new generation of banks that are born from innovation and built on technology intended to empower consumers and businesses.

As a new national bank, Varo joins the world’s most respected system of financial institutions and has the opportunity to become a household name as many other national banks have become. I congratulate Varo founder Colin Walsh and all the men and women of Varo Bank, N.A. on this important occasion and wish them great success serving the banking needs of their community and customers.”

Varo Bank, along with its executive team including visionary founder and CEO Colin Walsh, gets to claim an accomplishment for the Fintech record books. Brooks should get some credit too as he has quickly emerged as a vocal advocate for Fintech after a few weeks on the job – recognizing that innovative financial services stand to provide better services for less for the masses.

Now Varo Bank can go head to head with incumbent banks as it seeks to convince people across the United States that Varo can be your primary bank – minus the (costly) bank branches.