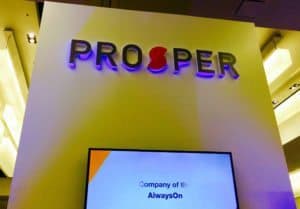 Prosper, a peer-to-peer lending company that connects borrowers and investors with over $17B in loans issued via its platform, has shared their performance data from the Prosper Portfolio for November 2020.

Last month, around 84% of originations were “rated AA-B compared to 86% in the prior month,” Prosper confirmed. They also noted that the weighted average annual income of platform borrowers last month was $105K, “remaining relatively flat year-over-year.”

Prosper also mentioned that the weighted average borrower rate for November 2020 originations “increased by 30 bps month-over-month, due to a higher mix of B-HR rated loan originations over the period.”

As confirmed on the platform’s official website, Prosper has “empowered” 1,061,045 people by issuing $18 billion in total loans. Prosper has reportedly issued 2,258 loans during the past week.

To date, more than $18 billion in personal loans have been originated via the Prosper platform for debt consolidation and major purchases including home improvement projects, medical expenses, and special occasions.

As reported in May 2020, Prosper Marketplace filed its first-quarter report on operations and the document provided insight into how the marketplace lender was faring during an economic landscape impacted by the Coronavirus.

Overall, Prosper had originated $17.1 billion since platform inception through March 31, 2020. For the three months ended March 31st, the marketplace lending platform had originated $449 million in loans – a 25% decrease from the same period year prior. The percentage of loans funded through Prosper’s whole loan channel during Q1 was 91%.

The decline in loan originations has naturally led to a decrease in transaction fees so net revenue had dropped dramatically (as of May 2020).

Of note, Prosper received $8.4 million under the Paycheck Protection Program (as of May 2020), part of the CARES Act, to cover payroll, rent etc. The company had also instituted temporary salary reductions and suspended certain benefits.

Prosper closed on a $50 million funding round at a $550 million valuation back in September 2017 (these valuations may now have changed significantly).