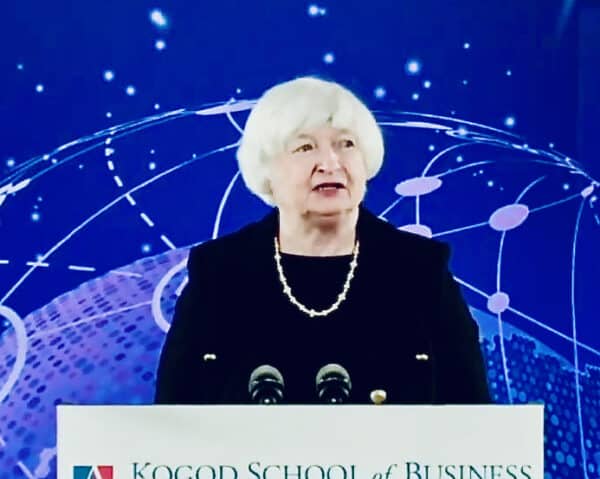 Secretary Yellen reflected on the growth of digital assets, rising from just $14 billion to around $3 trillion in just a few years. Referencing President Biden’s Executive Order regarding digital assets, Secretary Yellen reported that  during the next six months, “Treasury will work with colleagues in the White House and other agencies to produce foundational reports and recommendations related to these objectives.”

A Balance Between the Benefits and the Risks of Digital Assets

Yellen said that our financial system benefits from responsible innovation and digital asset advocates believe the technology will create a more efficient payment system with instantaneous transactions and lower costs, and boost inclusion. Will it live up to that “promise”? Yellen believes it is too soon to tell.

“Some have also suggested that the introduction of a Central Bank Digital Currency, or “CBDC”, could contribute to a more efficient payment system. As a liability of the central bank, a CBDC could become a form of trusted money comparable to physical cash, but potentially offering some of the projected benefits of digital assets,” said Yellen. “Under the Executive Order, the Administration will publish a report on the future of money and payments. The report will analyze possible design choices related to a potential CBDC and implications for payment systems, economic growth, financial stability, financial inclusion, and national security.”

She added that beneficial innovation must be embraced but sometimes innovation has “exacerbated inequality, given rise to illicit finance risks, and increased systemic financial risk.”

Secretary Yellen cautiously said that they “must also be prepared for possible changes in the structure of financial markets. ” Innovation may improve things but it can also undermine markets.

“I don’t yet know the conclusions we will reach, but we must be clear that issuing a CBDC would likely present a major design and engineering challenge that would require years of development, not months. So, I share the President’s urgency in pulling forward research to understand the challenges and opportunities a CBDC could present to American interests.”

Regarding stablecoins, privately issued digital assets that are pegged to another asset like the US dollar, Yellen stated that they are working with Congress on legislation to help ensure stablecoins are resilient, while safe for users and the broader economy.

Yellen balanced her statement by acknowledging that digital assets can provide benefits for Americans but the final outcome remains unclear and there is a need to move cautiously in regards to utilizing blockchain technology. She also added that they must be technology neutral – it is the outcome – not the technology.

“…some proponents speak as if the technology is so radically and beneficially transformative that the government should step back completely and let innovation take its course. On the other hand, skeptics see limited, if any, value in this technology and associated products and advocate that the government take a much more restrictive approach. Such divergence of perspectives has often been associated with new and transformative technologies. In my view, the government’s role should be to ensure responsible innovation – innovation that works for all Americans…”

While there was little new in her comments delivered at AU the fact that Treasury is open to investigation and the possibility of a future of digital assets should relieve industry participants –  but don’t anticipate a digital dollar issued by the US government anytime soon. As for stablecoins, they may be compelled to adhere to new regulation in the not so distant future.

You may watch the speech below.