Following the Voyager Digital (TSX: VOYG) (OTCQX: VYGVF) debacle that ended in bankruptcy after a loan from Three Arrow Capital (3AC) was not repaid, the Federal Deposit Insurance Corporation (FDIC) was compelled to make a statement on certain holdings at the Metropolitan Commercial Bank. As was reported previously, the FDIC took umbrage to certain statements being made by Voyager entities that the FDIC deemed misleading.

In light of events, the FDIC took the opportunity to publicly chastise Voyager and then soon followed with a general statement regarding FDIC-insured firms that deal with crypto.

Over the past several months, some crypto companies have suspended withdrawals or halted operations. In some cases, these companies have represented to their customers that their products are eligible for FDIC deposit insurance coverage, which may lead customers to believe, mistakenly, that their money or investments are safe.

The FDIC seeks to address misconceptions about the scope of deposit insurance coverage and related concerns.

The FDIC added that it only insures deposits held by banks and backstops the deposits only when a bank fails. The FDIC does not insure “assets issued by non-bank entities, such as crypto companies.” 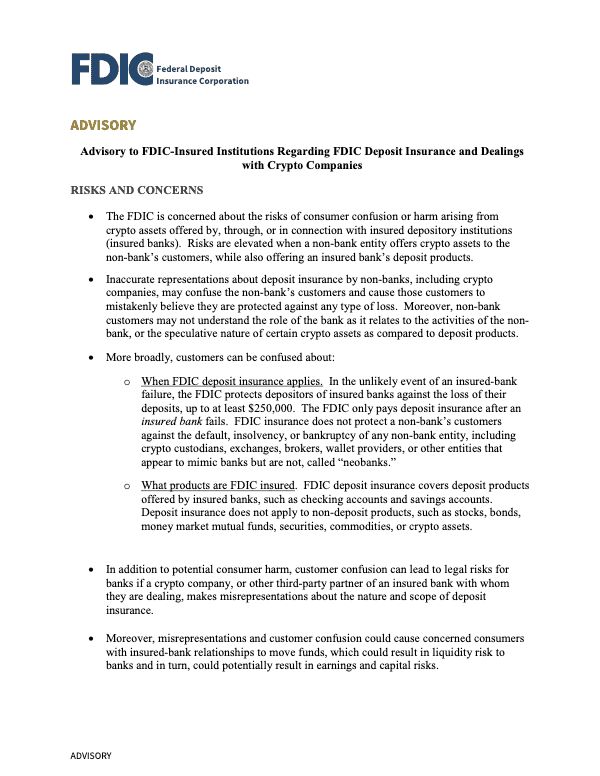