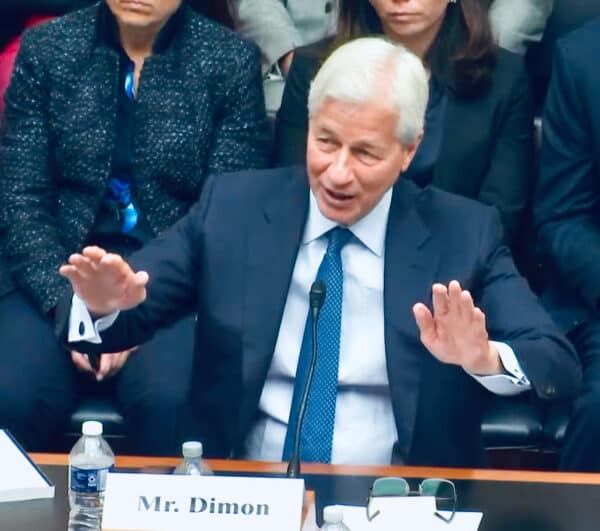 During the House Financial Services Committee hearing on Megabanks today, JP Morgan CEO Jamie Dimon was asked about his opinion on blockchain technology. Dimon said he was not a skeptic when it comes to blockchain, smart contracts, Defi, etc., these are real things in which he sees benefits. But Dimon took umbrage to “crypto tokens” or cryptocurrencies which are nothing more than decentralized Ponzi schemes – appearing to lump Bitcoin into the lot. He said the notion they are good for anybody is unbelievable. Dimon lambasted cryptocurrencies pointing to affiliated fraud and hacks that have seen billions of dollars in losses for holders.

Asked directly about stablecoins, Dimon said there is nothing wrong with a stablecoin that is properly regulated. He added that it should be treated like a money market fund. Dimon noted they are a big user of blockchain mentioning the JP Morgan coin; “It’s a dollar deposit.”

Currently, there is legislation in the works pertaining to stablecoin regulation that should be revealed by the Committee in the coming weeks or months.

The Hearing today was largely an elongated bank bashing session with the CEOs in attendance on the defensive in regard to their operations and alleged transgressions.

You may watch Dimon’s comments, responding to a question by Representative Gottheimer, in the video below (5:18).