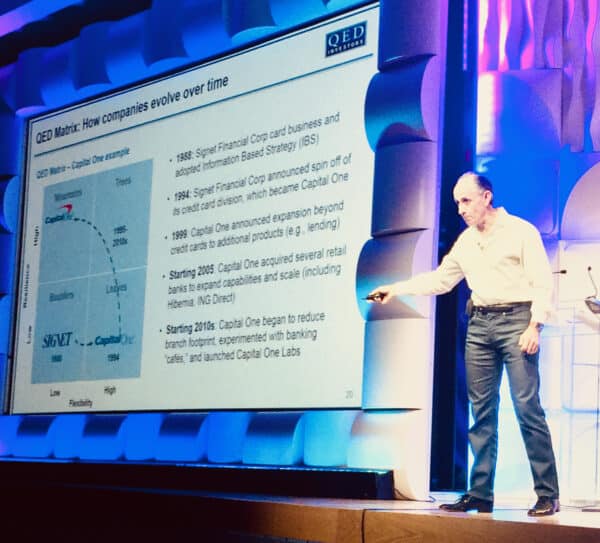 QED Investors is probably the most prominent and successful Fintech-focused venture capital firm. Holding dozens of well-known names in their portfolio – including multiple unicorns, QED is hyper-engaged with the  Fintech ecosystem around the world.

Recently, QED distributed a couple of comments on the status of the Fintech market in light of the challenging environment. Almost all markets have been struggling to manage high inflation along with rising interest rates while being impacted by geopolitical strife. Yet, QED remains bullish on Fintech as eventually, markets will shift and markets will improve. More specifically, QED predicts that non-bank lending will escalate post-recession, generating opportunities for Fintechs to step in.

CI connected with Nigel Morris, co-founder and Managing Partner of QED, to inquire about his thoughts on the current market conditions and where we will be heading in the not-so-distant future. Our conversation is below.

Many people believe we are already in a recession. Others predict a recession in 2023. Which is it? And for how long do you anticipate the downturn will last?

Nigel Morris: Part of the issue here is semantics. We did experience two consecutive quarters of negative GDP growth earlier this year, so by one definition, we have already experienced a recession. If you take a recession to mean a full and extended economic slowdown, then I don’t believe we’re currently in a recession, but that it’s not inconceivable that one is imminent.

But while consumer spending remains healthy and the labor market continues to be strong, it would be premature to say that all indicators across the board are trending down. Unlike 2007-08, the consumer is in much better shape. Debt-to-income ratios are better, Americans added over $4 trillion in savings during the pandemic and unemployment is still under 4%. This bodes well for financial services.

Aren’t expectations widely contingent upon the midterm elections? And, to a degree, resolution of global challenges?

Nigel Morris: I don’t think the Fed will change its outlook regardless of who is running the House or Senate. I think the biggest driver is what happens to interest rates, and interest rates won’t come down until people believe inflation has stabilized. Once that happens, we’ll see a move to a state of normalcy. It won’t be as go-go as it was 18 months ago, but it will certainly be a lot better than now. We’re probably 6-9 months away from that happening.

I always come back to one shining North Star – that there is an inextricability of Fintech. That is where the breakthroughs are coming. That’s where the innovation is. We’re passionate believers that we are still in Chapter 2 versus Chapter 8 of the Fintech story.

We see some of the really good public companies performing terrifically – Nubank, Remitly (both QED portfolio companies) — but nobody is listening. Everybody is focused on inflation.

There is an inextricability of #Fintech. That is where the breakthroughs are coming. That’s where the innovation is. We’re passionate believers that we are still in Chapter 2 versus Chapter 8 of the Fintech story Click to Tweet

You predict that banks will back away.  Mike Mayo recently noted that banks are going to kill it going forward as the spread (deposits -interest paid v. lending interest) has and will jump dramatically. Why back away now?

Nigel Morris:  The likes of Citi, Chase, Capital One, AmEx, and Bank of America are building out Chime and Current-esque functionality that they didn’t have two years ago. There’s a separation between haves and have-nots and the ones that are leaning in and building and those that are kicking the can down the road regarding digitization.

If you listened to SoFi’s earnings call, they are promoting the benefits of having a bank. But if you go to super-prime, the spread is 2%, not 8% or 10%. So if you’re a non-prime lender in the super-prime space, you can’t make the economics work. SoFi needs to have a banking license – and they do have one – so does Lending Club. Their average FICO score is 750, whereas Mission Lane’s average FICO score is 650.

How can non-bank lenders without a deposit base compete more effectively? Isn’t their cost of capital higher?

Nigel Morris: It is higher, but quite simply, they’re solving a problem that traditional banks are not interested in tackling. They’re going to places that banks don’t go, where the spreads can be large that an extra point or two in cost of funds is not that problematic because the returns are compelling.

If you lend $1,000 and your ROA is 10%, you make $100. If your cost of funds as a non-bank is 5% — for a bank it is 2% — you would have 3 points of ROA differential advantage, and that can be made up with lower operational costs, better targeting, and credit risk management.

The issue is access rather than price. If you’re a bank, people give you deposits because of FDIC insurance and you have this never-ending, stable access to deposits. Fintechs make up for having a higher cost of capital by being all digital, being much more analytically adroit, and crucially by going to places that banks don’t go. They’re lending to populations that banks don’t compete for, so you’re actually only competing with other fintechs and payday lenders, who are odious.

Fintechs are lending to populations that banks don’t compete for, so you’re actually only competing with other #fintechs and payday lenders, who are odious. Click to Tweet

Part of a digital lender or neobanks advantage is the process. Is this slipping away as banks adapt and adjust (albeit rather slowly)?

Nigel Morris: It’s the circle of life. Neobanks will eventually become non-neobanks, and new neobanks will emerge to challenge them. Capital One was the innovator 25 years ago; now, it’s an incumbent. Those incumbents need to prevent becoming more institutionalized and calcified and more process-oriented because there’s a likelihood they will become slower-moving and more bureaucratic. If so, they will, in time, be leapfrogged.

If you believe we are in Chapter 2, not Chapter 8 of the Fintech story, it’s not the existing challengers that will be there at Chapter 6, it will be a whole new generation of challengers. The ones that are successful now, when Chapter 6 comes around, they will be part of the old orthodoxy.

If you look at LendingClub, a digital bank, they were surprised as to how deposits helped to boost their bottom line. Are digital banks that have a robust tech stack better positioned?

Nigel Morris: Digital servicing makes a huge difference and people prefer it. I don’t want to talk to a human about what my balance is. If I have a really big problem or I want to dispute something, maybe I want to discuss that with a human, but increasingly, people do not want to be serviced by human beings.

QED has backed a lot of online lenders. Which firms do you envision will benefit the most?

Nigel Morris: Two notable examples from the portfolio that are primed for success are Mission Lane and Current.

Mission Lane’s goal is to lend money where it’s difficult to do so and in areas where others struggle to serve. They accomplish that through proprietary underwriting, incorporated throughout the entire business, that goes beyond FICO scores alone.

As a Fintech, Mission Lane is able to scale quickly instead of being slowed down by bureaucracy. As implied by the name, they’re a mission-driven company trying to provide a better path for people who don’t have access to traditional financial products. Today, Mission Lane has more than 2 million customers and growing.

Consumer Fintechs like Current have successfully been providing microcredit for years, including providing paychecks up to two days early as well as an overdraft facility. Current continues to build its own banking technology, and it is now doing its own processing directly with Visa after migrating to the Visa DPS Forward platform.

Both Mission Lane and Current have a real purpose solving real problems. Other Fintechs in the QED portfolio that we’re also excited about because of the way they democratize access to financial inclusion include Albert and ClearScore.

The most prominent and successful #Fintech-focused venture capital firm Click to Tweet
Sponsored
Medical 21 Aims to Revolutionize Bypass Surgery, a Multi-Billion Dollar Sector of Healthcare, Sells Shares to the Public in a Reg A+ Securities Offering
Sponsored Links by DQ Promote