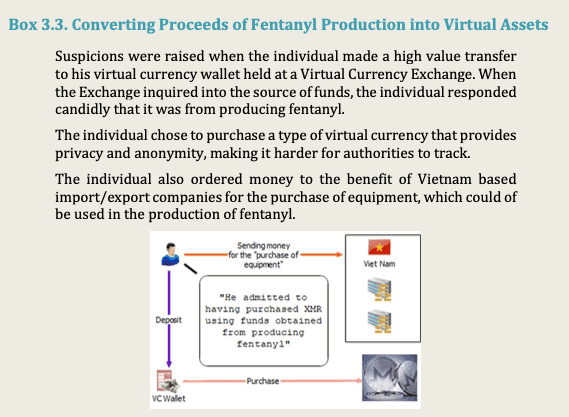 The Financial Action Task Force (FATF) has published a report on money laundering from fentanyl and synthetic opioids. The report was co-led by the US and Canada and offers recommendations for countering the illicit drug trade.

FATF is a global organization that aims to encourage policies that battle money laundering and other illicit activity within the financial markets. FATF regularly provides recommendations for member states which may choose to incorporate the guidance to stem bad actors around the world.

In this most recent report, FATF states that organized crime is fueling the opioid crisis, which has caused hundreds of thousands of deathers. In the US alone, over 80,000 people die each year due to these illegal drugs.

Frequently, criminals utilize the dark web to sell their products. While some transactions involve more traditional fiat currency, “virtual assets” or cryptocurrency is frequently utilized, which is quickly migrated to fiat. Bitcoin is the most popular digital asset option.

Until 2019, most fentanyl-related substances came from East Asia, with countries such as Mexico or Canada serving as a transit point. Starting in 2019, organized crime started to import precursor chemicals to manufacture fentanyl in Mexico and then ship the product elsewhere.

In regards to crypto, the report states that enforcement of money laundering rules remains uneven.

“Many jurisdictions have prioritised the provision of guidance to virtual asset service providers to better understand their risk context and vulnerabilities, which can prevent their exploitation by a variety of organised criminal groups, including drug traffickers. Ability to risk assess and flag transactions of virtual assets is an important detection tool for suspicious financial activity.”

The FATF report is available here.