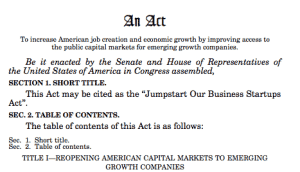 Republican lawmakers on Thursday blasted top officials at the nation’s securities watchdog over delays in the agency’s implementation of key aspects of a law approved a year ago to help small businesses accumulate capital.

“I’m getting a lot of verbal moon-walking but I’m not getting anywhere,” said Rep. Kerry Bentivolio, Republican from Michigan, at a House small business committee hearing about establishing rules based on the Jumpstart Our Business Startups Act — a , approved in April 2012.

Bentivolio’s comments echoed those of a number of Republicans at the hearing, who raised concerns that the Securities and Exchange Commission has yet to implement a couple measures they are required by law to adopt, including a provision known as “crowdfunding,” that seeks to ease restrictions on entrepreneurs so they can raise capital cheaply by providing exemptions from SEC registration and disclosure rules to raise up to $1 million annually.