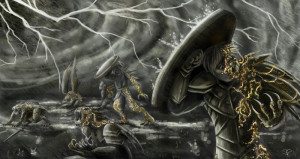 ®City State Entertainment’s realm vs. realm focused MMORPG Camelot Unchained did it! They’ve successfully reached and surpassed their $2 million Kickstarter goal, despite still being more than 10% away as the project approached its final 24 hours. Due to its success, City State boss Mark Jacobs will drop his own $2 million in the pot along with another million from third party investors. Now lets see what 5 million and two and half years of development can make.

“The last 30 days have been an incredible journey. We believed there’s an audience for a highly focused game like ours, which has now been proven. What we didn’t expect was how our community would come together so quickly and avidly. Not only is our average pledge off the chart, our backers have been just as intensely supportive in other ways, from providing immense amounts of helpful feedback to translating information into four languages (German, French, Japanese and Korean), and more. “