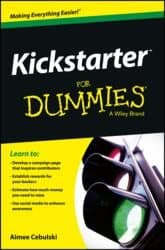 This week the folks behind the For Dummies® series of self help and reference books announced a new title focusing on crowdfunding site Kickstarter. From the press release…

Today, the world’s bestselling reference series, For Dummies® announces Kickstarter For Dummies (Wiley, 978-1-118-50543-4, May 2013, US $16.99), a friendly and comprehensive guide that walks readers through the process and potential of the crowdfunding website Kickstarter, an amazing tool that has helped project creators successfully launch their projects since 2009. In a straightforward and fun language that has defined the For Dummies series for over 20 years, author Aimee Cebulski provides a guided tour of how ambitious, innovative, and imaginative projects are brought to life through the direct support of others.

Inside, readers learn how to create a Kickstarter account, set up a first project, and effectively use social media to bring awareness to the project and build up the community around it to reach the goal of 100 percent funding. Some of the topics covered in Kickstarter For Dummies include:

Whether it’s an idea for a movie, video game, gadget or anything in between, Kickstarter For Dummies is the guide to help creators get the funds to make that idea happen. The book is now available for purchase online and at retailers nationwide in both print and all e-book formats. For a full list of retailers, visithttp://www.dummies.com/buy/9781118505434. For additional information about this book and related For Dummies products, visit http://www.dummies.com.