With less than week left on this crowdfunding campaign, the organizers cancelled the Kickstarter project.  The company behind the effort, Stompy Bot Productions located in Canada, had set a target of $800,000 but stood at only $44,981 raised via 879 backers.

In a posting on the Kickstarter page blog the project creator stated:

Thank you for your dedicated support. We appreciate and highly value everyone’s opinions here which is why we have decided to cancel this KS campaign and continue crowd funding on heavygear.com. We believe very strongly in resurrecting the Heavy Gear franchise and giving the fans what they want. We are currently evaluating other strategies to raise awareness regarding Heavy Gear and looking at multiple means to get the Heavy Gear name out there. Thank you for your support everyone and stay tuned. 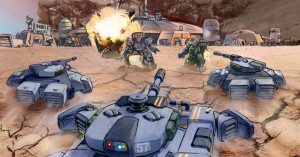 Supporters of the effort were understandably dissappointed with many expressing their opinions as to why the crowdfunding campaign failed.  Some thought the target was simply too high others inferred without a big name the interest was not there.  With most large scale crowdfunding campaigns these day it is an unspoken truth that 30% of the funds raised must be committed prior to launch to have a chance at success.

It is also common practice to incorporate additional funding on the

developers site.  Stompy Bot has continued their self-crowdfunding campaign on the HeavyGear web site where they have raised over $121,000 to date.

Heavy Gear Assault is the a mech  video game for Windows, Mac and Linux platforms. The developers have incorporated Unreal Engine 4 in building their game which features single playor story missions as well as multi-player online games.