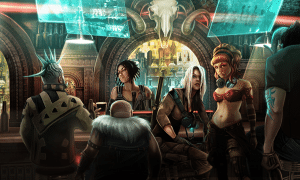 Launching for both PC and Mac on Steam  with mobile tablets coming soon, Shadowrun Returns, is a highly anticipated, crowdfunded videogame with a long history. Created by Harebrained Schemes in Seattle, Washington, the Shadowrun universe has involved several games and novels over the years. Creator Jordan Weisman returns to the world of Shadowrun, modernizing this classic game setting as a single-player, turn-based tactical RPG.

“Due to the generous community funding last Spring, the creation of Shadowrun Returns has been a shared community experience from its beginning and we want this to continue,” said Jordan Weisman, founder of Harebrained Schemes and creator of the original Shadowrun. “This game and universe is very important and nostalgic for us, and this last year has been an exciting ride. The incredible fan outreach and interaction 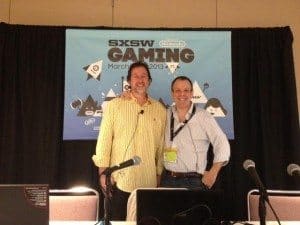 has made it both an exhilarating, and scary, project to work on, as we don’t want to disappoint. We have been encouraged and amazed by the user-generated Shadowrun Returns’ content already created by our Kickstarter backers that had early access to our game editor, and we are looking forward for this to continue. We can’t wait to see what stories our players have to tell within the Shadowrun universe.”

The Kickstarter campaign completed in April of 2012 having crowdfunded $1,836,447 on a goal of $400,000.  The project was supported by 36,276 backers.  Games is the most successful category on Kickstarter having raised almost $140 Million since the crowdfunding site launched.

In a posting on their crowdfunding updates page the organizers posted the following statement thanking all of their fans:

Jordan here with our last update before Shadowrun Returns gets into your hands. (Wow, I can’t believe I just typed that!)

I want to take a moment to personally thank you again for all your support over the last year or so. It’s been so great hearing from you on the forums, meeting you in person at cons, and eating the bagels and pizza you sent us. It’s definitely an experience I’ll never forget!

I also want to publicly thank the team at Harebrained Schemes for all their incredibly hard work over the past year. What a great group of people! They’re passionate about making games, about working in a highly-collaborative, high-energy environment, and about making Shadowrun Returns. They’ve really risen to the challenge and it’s been a pleasure going on this adventure with them.

On behalf of the team, I sincerely hope you enjoy Shadowrun Returns. It’s been a labor of love and represents one of the greatest collaborations of my career. Thanks again for the opportunity.

So what’s next? Well, work on the Berlin campaign has already begun. And Linux, of course! And localization!

But that’s not all…

Below, you’ll see the first piece of concept art and a little video that tells you about our next Harebrained Scheme, Golem Arcana, which will launch on Kickstarter in August.

While it was tempting to start another tactical RPG project similar to Shadowrun Returns, we really believe in the potential that Kickstarter holds for launching new game worlds and experiences. I had this idea brewing in the back of my head for awhile and we decided that now was the right time to launch a new Harebrained Scheme.

So, the core Shadowrun team will continue to focus on Shadowrun Returns, while a small part of the studio branches off in this bold new direction. I’m really excited about our new game world and I hope you will be, too. Take a look below.