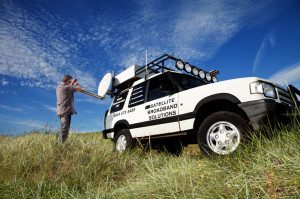 New Scottish crowdfunding platform Squareknot launches with high profile crowdfunding campaign on site.  Satellite broadband provider Internet Anywhere has launched a funding round to raise £125,000.  The funding round represents 10% equity  in the company.

Internet Anywhere is the largest Scottish reseller for Eutelsat, one of the world’s leading satellite operators.  The system offers the 3.3million UK properties that can’t get broadband above 2Mbps, download speeds of up to 20 Mbps and upload speeds of up to 6 Mbps, with no need for a telephone line.

Set up in 2011, Ayshire based Internet Anywhere is Scotland’s largest reseller of satellite broadband technology, providing a high-speed connection to remote parts of Scotland, mobile sites and any place where access to the Internet is otherwise unavailable.

“More than 300,000 premises in Scotland have either no broadband or slow connections. This is damaging for rural communities and has significant negative repercussions for the country’s economy.

“Our aim to eliminate Scotland’s rural broadband problem and this funding would put us in a position to do so”.

Internet Anywhere is offering a unique package to draw in potential investors. They’re looking for 125

people to invest £1000 each and as a reward, investors will get a satellite broadband system installed free of charge, as well as SEIS tax relief on their investment.

“This is a fantastic opportunity for us, particularly in the current climate where traditional ways of financing business are now virtually non-existent. We’re delighted to be involved in such an innovative project,” said John.

The Squareknot site can offer both equity and loan funding on the same platform to all UK companies. It will focus on a range of projects with fund-raising targets ranging between £10,000 and £300,000.

Derek Bond, of Squareknot said: “Internet Anywhere has all the attributes to be successfully funded as it is an easy to understand business model, the business is already trading fairly successfully, and there are literally millions of households and businesses in the UK alone who would benefit from satellite broadband.”

Organisers hope that this venture will make a significant difference to many small to medium businesses that are seeking much-needed capital funding.