Started by Greenwich Village mask maker and puppeteer Ralph Lee in 1974, the Parade began as a walk from house to house in his neighborhood for his children and their friends. In 1981, with audiences reaching into the hundred thousands, Celebration Artist and Producer Jeanne Fleming, a long-time participant in the Parade took over the event. Today, the parade draws more than 60,000 costumed participants and some two million spectators. It is the largest celebration of its kind in the world and has been picked by Festivals International as “The Best Event in the World” for October 31.

The Village Halloween Parade that takes place every year in the Greenwich Village section of New York City is an institution in the Big Apple. Every year nearly 2 million people line 6th avenue to watch tens of thousands of costumed paraders take part in the parade. 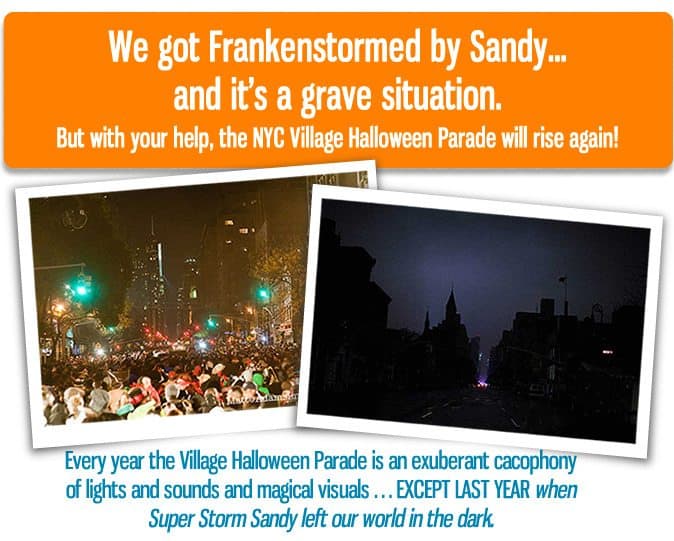 The Halloween Parade fell victim to Superstorm Sandy last year. The event was cancelled for the first time in 39 years as the hurricane all but shut down one of the biggest cities in the world.

The cancelling of last year’s event left parade organizers with a budget shortfall. Now the event’s organizers have turned to Kickstarter to try and close the gap, asking for $50,000 in funds in order to keep the event going.

Money raised will be used for purposes of securing security, insurance, staff uniforms and all of the other expenses that come along with hosting a public event featuring millions of people.

In exchange for the crowd’s support, organizers are offering rewards including t-shirts, masks and various chances to be featured in the parade itself. Want to be a part of the “Thriller” section of the parade? It can be had for a $100 pledge. Want a Lady Gaga impersonator to officiate your wedding? $700. VIP viewership of the parade? One backer secured that reward for $750.

The campaign is right on schedule to hit a $50,000 funding goal, having raised just short of $23,000 with a little less than a month left in the campaign at the time of writing.