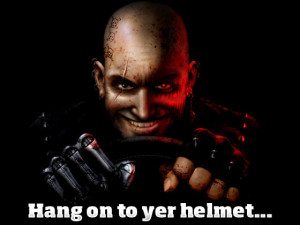 The story starts with Carmageddon: Reincarnation, a game that was fully funded on Kickstarter to the tune of over $625,000. It ends with backers having their voice be heard on the subject of downloadable content for the game.

Game developer Stainless Games expressed in a recent backer update that downloadable content (DLC) for the upcoming game would come at an additional fee. Backers took issue with the fact that this approach wasn’t clearly spelled out during the campaign. Many backers were under the presumption that their pledge included all content relevant to the game, and they took to the Kickstarter comments to let Stainless know how they felt. 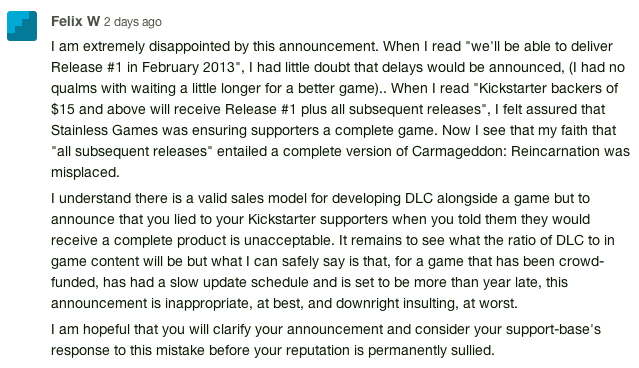 This response has led Stainless to backpeddle on the original plan of letting backers participate in a socially-driven contest to be entered to win DLC for the upcoming game. They are now promising that all backers will get access to all of the DLC for the game for life at no cost, a message that they shared in a recent backer update…

Hey guys, it’s nobby here! Sorry to be spamming you all with another Update so soon, but we have an important announcement for you. We’ve been following the feedback today very closely, and it became clear we’d screwed this one up – and so we’re happy to tell you that we’re doing the only thing that’s fair and all of you who paid for the game, will get the game plus ALL DLC. We’re putting out a Press Release and posting the news on Carmageddon.com, so that the message gets out there loud and clear: ALL KICKSTARTER/PAYPAL BACKERS WHO PAID TO RECEIVE THE GAME WILL GET THE FULL GAME PLUS ALL DLC!

The response has resulted in many backers taking to Kickstarter to express support for the decision. This support comes despite the fact that the campaign is far behind the target for delivery. At this point delivery of the full game is expected in Q1 of 2014. The stated  delivery date during the campaign was February of 2013.