The Sound Band headset, which produces audio without using speakers, found crowdfunding success on Kickstarter raising funds well past their goal closing at $547,125.  The Traverse City, Michigan based company expects to ship their unique product this year.  As part of their spreading the word, Hybra entered into Inuit’s Small Business Big Game Contest.  The grand prize is a 30 second ad during the 2014 Super Bowl.  Hybra has advanced to the second round and they are asking for everyone’s support in the voting process.

“The competition is very much consumer-votes-based, and it’s not a ‘vote once and its done’ system.” said Ryan Wells, Managing Director of Hybra. “Supporters can vote for us every day, and Intuit has made it very easy to share via various social media platforms; naturally we encourage our supporters to do just that!”

“We want to see a Sound Band ad during the Big Game in 2014, but we need the help of innovation lovers, and their friends, to help us get there. Making it into to Stage 3 means that we will be among the Top 20 contenders for the prize – and that’s where we want to be!” 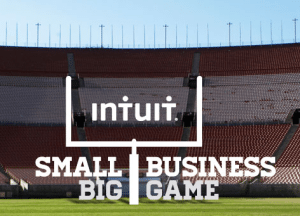 Voting in Round 2 of the Intuit Small Business Big Game competition ends on October 13.

Sound Band from Hybra promotes itself as a solution to ear buds. It is a wireless headset that uses surface sound technology (not speakers) to deliver sound to both ears, while leaving the user’s ears open to the ambient environment. No longer any need to remove your ear buds to have a conversation as you can still hear the world around you – but the world around you cannot hear your Sound Band.