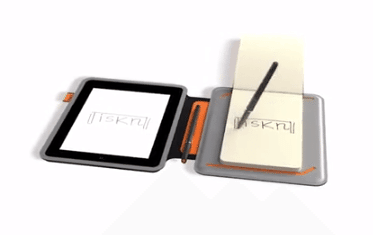 As soon as we watched the Kickstarter pitch video provided by the ISKN team you could see the product was going to be a crowdfunding hit.  This smart iPad cover does everything you want it to do.  Their goal was hit in the first 13 hours of the campaign.

Using new digitizing technology the iPad you love now will bring new power for taking notes on paper.  Early bird backers got into this product for $119.00 which is expected to be a savings of $70 off of the forthcoming retail price.  Even at $200 this device will sell by the skid.

ISKN is based in Grenoble, France.  The company was founded in 2013 with a mission to combine the natural experience of familiar tools with the power of technology.  The company has patented the sensor technology they are working to integrate into multiple products. The iSketchnote has successfully integrated the natural experience of  pen and paper with the power of your iPad.  So where is equity crowdfunding when you want it? 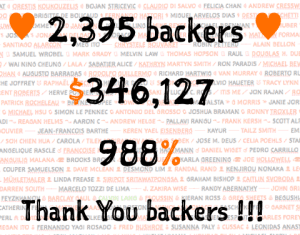 The project was supported by 2395 backers with contributions ranging from $1 up to $4999.00.  Of course the bulk of the rewards came in where backers received at least a single iSketchnote.  The funds were needed for their first round of manufacturing 1000 iSketchnotes so they should not have a problem paying the invoice.  With an almost 1000% beat on their original goal the ISKN team is ready to go and thanked their supporters for the overwhelming support.

Here we are! At the end of the campaign, but at the beginning of our journey and here are the results:

This is just the beginning …

The iSketchnote Kickstarter campaign was totally amazing! Again, the entire iSketchnote team wants to thank each and every one of our backers, supporters and all those who have believed in our idea. We are completely blown away by your enthusiasm and kindness. You are truly an inspiration to us and we are thrilled to have the opportunity to make this product for you.

Because of your support, iSketchnote will become a reality as we launch our first manufacturing round of the iSketchnote cover. But this is just the beginning …

We will be shutting communications down for the next few days to take a short break and to begin the next phase of iSketchnote development. We have done our best to be as responsive as possible during these past 30 days – lots of work and little sleep 🙂 – and we appreciate your understanding. But we will be back to you very soon with new updates about our progress via Kickstarter Updates.

iSketchnote will capture even more exposure as they are planning on attending CES in January 2014.  The only apparent glitch in this campaign appears to have been a cancelled contest which unfortunately did not comply with the Kickstarter terms.  Scheduled delivery for the first batch of iSketchnotes should be delivered to backers in May of 2014.