Lexell Stone Watches set an initial goal of raising $15,000 on Kickstarter but if you blinked you probably missed that mark as they became successfully funded 3 hours after they launched their crowdfunding campaign.  After 24 hours Lexell had hit more than 400% of their funding objective.

Created by a team of “best friends” the founders Tim Nybo, Stephen Ramil, Sean Agatep, Aaron Hallerman and Nick Ramil set out to create a watch which incorporates stone and steel in an elegant and unique design.  Their core competency is in the manufacturing process which gives credence to their design approach and ability to deliver.  The process was well documented in their informative pitch video which described their perseverance in creating their concept.  The approach caught the attention of Kickstarter followers to drive their success and the campaign continues to grow at a healthy pace.

The prevail crowdfunding campaign has set reward pricing at a very affordable level where a backer may purchase a Lexell stone watch with leather band for only $89.00.  For $119.00 supporters may now get their choice of a watch which is expected to retail at $219.00. 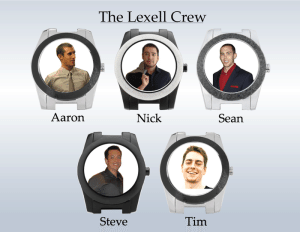 The Fashion segment is not Kickstarter’s most successful category.  9th on the list for successful funds raised with a success rate of only a bit over 29%.  Watches as a sub-category have performed fairly well though as these items tend to attract a more committed audience.  Watches these days are more about style than keeping time.  Lexell’s design approach incorporating stone and steel for a design you cannot get anyplace else created an element of exclusivity – at a reasonable price.

With more than 30 days left in the campaign and stretch goals set – it will be interesting to see where this campaign lands.