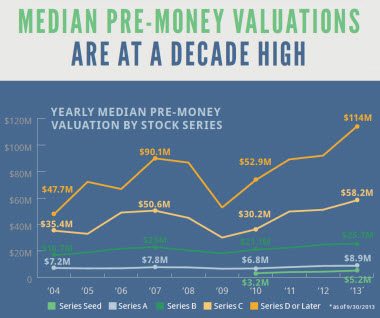 Pitchbook offered up a sneak peek into their VC Valuations and Trends report earlier this week and it was interesting to see that pre-money valuations for seed round investing is at a high.  Seed rounds have increased 100% since 2009 to Q3 of 2013.  Series D rounds – or later have also increased by 116% during the same time period.

According to their data Pre-Money valuation for Seed rounds stand at $5.3 Million.  Series D stands at $132 Million for Q3 2013.

The number of valuations along with the number of VC Deals have declined in 2013 when comparing to 2012. In 2013 there have been 2948 deals to date in contrast to full year numbers for 2012 where Pitchbook tracked 4,522 deals.