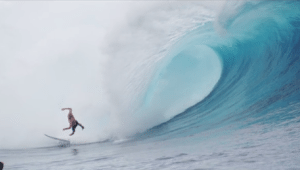 Talon Clemlow is crowdfunding his independent surf documentary Thundercloud on Pozible and if you watch the trailers this film looks pretty awesome.

Based around one of the most spectacular days in surfing history, June 8th 2012, when a swell of massive proportions arrived at Cloudbreak, (aka Thundercloud Reef) in Fiji, right in the middle of the ASP World Championship Surfing Tour Event.  Clemlow was there to film world famous surfers who try to ride these monster waves.

Clemlow and his production company onepalmMEDIA are hoping to crowdfund A $20,000 to complete the film.  Funds will be used to complete production and also to promote the final product.  Clemlow has compiled interviews and accounts from the world’s best surfers, that challenged themselves in the South Pacific Ocean that day and survived these enormous waves.

Thundercloud is Clemlow’s biggest project to date but he feels he is very lucky to have been in the right place, at the right time and able to capture these incredible surfers ride these waves.   If fully funded he hopes to have the film completed by February 2014.