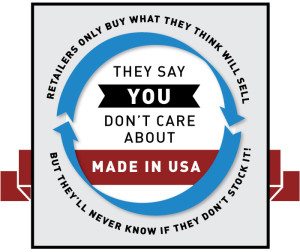 How does one go about raising over $50,000 on Kickstarter for blue shoelaces?

The answer has a lot to do with the man behind the Bluelace Project, Jake Bronstein. The former Road Rules cast member and FHM editor is now the founder of a clothing company called Flint & Tinder. The company has crowdfunded on Kickstarter twice now and both campaigns were wildly successful.

RELATED | Flint And Tinder Do It Again, Net Huge Raise For The 10-Year Hoodie

WE ASKED 1000+ RETAILERS WHY THEY DON’T CARRY MORE DOMESTICALLY PRODUCED PRODUCTS. They all said the same thing: “Our customers don’t care about domestically produced products.” We call bullsh*t, but we need your help to prove them wrong.

“The Bluelace Project” aims to crowdfund blue shoelaces that are meant to represent the support of manufacturing in the US. It goes along with previous projects under the Flint & Tinder brand. Bronstein is passionate about stateside manufacturing and all of his campaigns aim to push this mantra.

Whether Bronstein will be able to leverage his Kickstarter success to get the shoelaces into a retail setting remains to be seen.