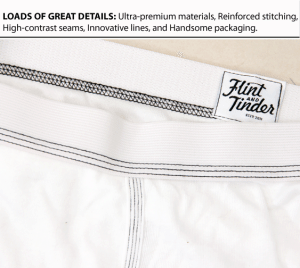 Flint and Tinder became famous in 2012 for raising $300,000 to change how men buy underwear in the US. Founder Jake Bronstein noticed that most of the product available on store shelves was made overseas and left a lot to be desired in the quality department. He turned to Kickstarter to raise $30,000.

It goes without saying that a 10 year hoodie has to be rugged, and this one appears to be… most of the stitching is reinforced and the fabrics used appear to be of the premium sort. The hoodie costs $89 on preorder, which sounded like a lot to me until I looked in my closet and saw a bunch of tattered $60 hoodies that I’ve had for a few years max.

It speaks to the mission of Flint and Tinder… premium clothing that is made in the USA and made to last. This is a great example of the type of concious capitalism that may be shunned by traditional funding sources for not putting profits first. It’s now a reality thanks to crowdfunding and Kickstarter.