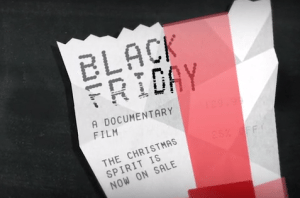 “Black Friday” is the term given to the Friday after Thanksgiving. It’s the unofficial start to the holiday shopping season and the day that many retailers go from being “in the red” to “in the black” for the first time all year. It’s also become a shopping phenomenon, where deal seekers line up outside stores before opening in an effort to save money on holiday gifts. (This despite the fact that many say Black Friday deals are a hoax.)

The day is inevitably marked by stories of fights and other ill outcomes as shoppers jockey for position and try to snatch up limited quantities of what they deem to be the best deals. This year, Twitter users have catalogued these incidents at the nation’s most popular retailer under the hashtag #WalmartFights.

A timely campaign on Kickstarter aims to fund post-production of a documentary about the Black Friday craze, appropriately titled Black Friday.

Black Friday is the biggest shopping day in the world. In 2010, 212 million Americans spent $45 billion during 24 hours of shopping. The day before Black Friday is Thanksgiving, a holiday dedicated to giving. Yet ironically, starting just hours after Thanksgiving dinner, Americans are consumed with trying to get as much as possible. I was sure that Black Friday was the villain. But what I ended up with was something completely different….

The documentary has already been filmed. 2010’s Black Friday provides the backdrop for the story of two people, one a compulsive shopper and one a traveling Santa Claus.

Heather is the shopper in the film. On Black Friday, she dresses “like a homeless person” and puts on root hormone to make herself smell like a dead animal. This is all in an effort to drive other shoppers away and net herself the best deals. In the end, it’s all about her seven year old daughter for whom she is trying to make Christmas special for.

The crowdfunding campaign for the film is seeking $35,000 to fund post-production, which will include a musical score and four months of editing. The film would be slated for release during the holiday season of 2014. Thus far the film has raised just over $16,000 of that goal, but perhaps today could be a boon.