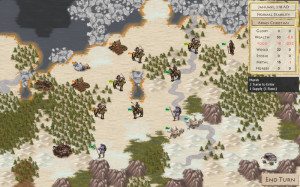 Jon Shafer successfully crowdfunded his strategy game At The Gates on Kickstarter. The round closed in May of 2013 after having raised just over $106,000 on a goal of just $40,000. Shafer had some cred in the gaming world from being a designer on Civitization V and hosting a podcast called The Game Design Round Table.

He announced via a recent backer update that the release of At The Gates, which was slated for July of next year, will likely be pushed back until sometime in 2015. From the update…

In the first few months of 2014 we’ll open the game up to beta testing and shift over to ‘tweak and polish’ mode – where we’ll remain for a loooong time. I’ve noted in both the original Kickstarter pitch and subsequent updates that the goal with AtG is not just to make a strategy game that not only breaks new ground but also one that is polished at release. This recipe calls for one key ingredient which has no substitute: time.

AtG could be released as originally planned in mid-2014 as a ‘good’ game. But would it be one of the best strategy games ever? Probably not. As such, I’ve made the decision to push back AtG’s release until 2015.

I know this is disappointing news, but at the end of the day what we all want is agreat game, and our team is willing to stick with AtG as long as it takes to get there. This kind of flexibility is only possible because our funding comes from your generosity, and while painful in the short term it will no doubt pay off over the long term. I think I speak for everyone in saying that what we want is an amazing game, even if it means a longer wait.

Backers have been largely supportive of the move, further proving the point that transparency and communication with backers can often make the best of unforeseen circumstances.