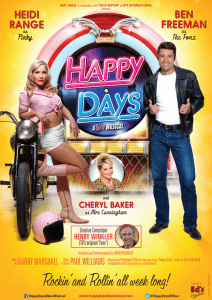 Musical version of the classic TV sitcom “Happy Days” has claimed the title of the first major theatrical production in the world to gain financing through equity crowdfunding and they have done so on UK based Seedrs.   The crowdfunding round raised £250,000 from 345 investors in just 6 weeks  This is a world first where a major theatre production has raised money by opening up investment to anyone and offering a participation in the profits of the show.

“I am thrilled to say that our Happy Days campaign on Seedrs has now fully funded.  It is extremely exciting to have been the first commercial theatrical production to have done so successfully.  We knew that there were many Happy Days fans out there that would probably love the chance to become

involved in the production, so we gave people the opportunity to invest in the show via Seedrs and in just 6 weeks’ time, 345 investors came on board and together invested £250,000.  We look forward to sharing our journey with our new investors.”

Jeff Lynn,Co-founder and CEO of Seedrs, commented on the successful equity crowdfunding round,

“This was another great example of how equity crowdfunding can unleash the power of communities to get exciting new ventures off the ground. Investors in Happy Days are now patrons who will encourage their network to buy tickets and will buy tickets themselves. Now that Seedrs is open to all of Europe for both investors and entrepreneurs, I am sure we will see an increasing range of enterprises coming to us to raise the money they need to get off the ground by sharing their future upside with investors.”

While there have been many theatre and film projects that have raised money using ‘rewards-based’ crowdfunding sites such as Kickstarter and Indiegogo, this is the first time crowd investors will be able to get a share in the profits of a major theatrical production in return for their investment.

“We decided to use Seedrs for several reasons. 1) To enable individuals throughout the UK to

get involved financially. 2) To potentially aid ticket sales. If individuals are involved financially they may talk about it with family and friends. Further, we knew there would be added press by doing part of the fund raise through crowdfunding. Both should aid ticket sales.  3) To be the first major commercial theatrical production to raise funds through equity crowdfunding. 4) We like the Seedrs team and think they do a great job, so we wanted to support them, as well.”

The iconic Garry Marshall and creator of the original Happy Days series said,

“I’m so excited Happy Days the Musical is going to the UK.  I always dreamed about the TV series becoming a musical.  Audiences of all ages will have a great time – they’ll hear fantastic music and singing and some of the best dancing you’ll ever see plus a wonderful love story between Pinky and Fonzie.”

The new musical was written by Garry Marshall.  Henry Winkler, who famously played The Fonz in the hit 1950s-set comedy, is acting as Creative Consultant on the musical version of the show, which will feature original songs by Oscar, Grammy and Golden Globe award-winning Hall of Fame Songwriter Paul Williams – as well as the iconic

TV theme tune.  Actor Ben Freeman as The Fonz; Heidi Range, best known as one of the Sugababes, as Pinky Tuscadero; and Cheryl Baker, of Bucks Fizz fame, as Mrs Cunningham.

The Happy Days cast are currently in rehearsals and the show will begin in January 2014 at the Churchill Theatre Bromley before embarking on a national tour. A West End version is also planned.