The team behind the forthcoming, Kickstarter-backed video game Mighty No. 9 wanted to hire a community manager to increase communication between themselves and their backers. Seems to be a simple proposition, right?

It all comes down to who the team picked to take on the role of community manager. Her name is Dina Abou Karam. She was a backer of the Kickstarter campaign and contributed some fan art during. At least one piece of fan art depicted the main character in the game as a female, and associated comments posted to Kickstarter encouraged the team behind the game to consider gender and gender roles when crafting the main character. (Click the image for a full view) 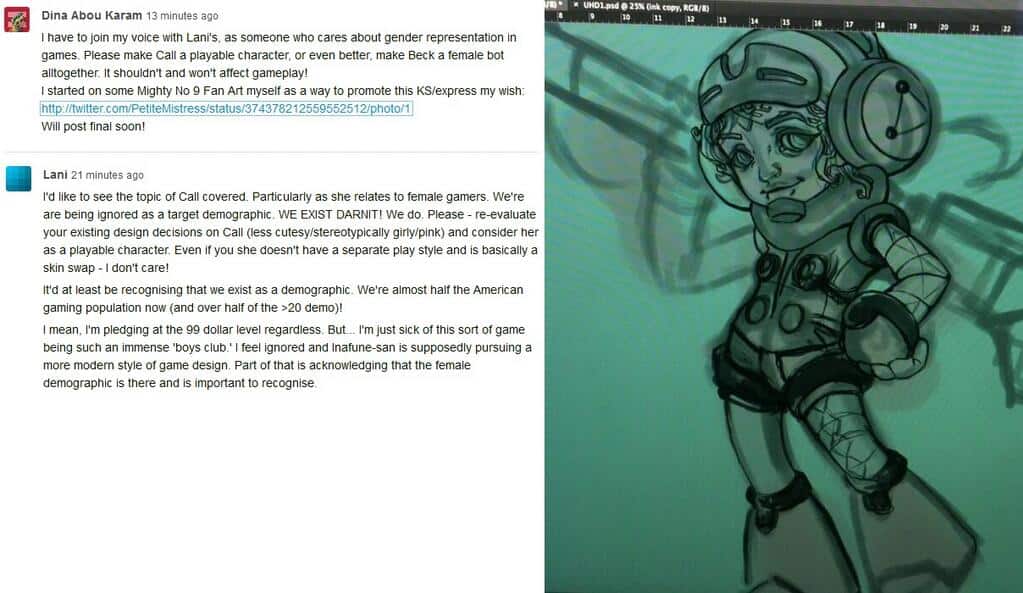 As the crowd often does, they dug into Karam’s social media accounts looking for more insight into her personal views. Some didn’t like what they found. For one, she was said to be involved in the design of the game itself. This concerned some that disagreed with her previous assertion that there should be a female playable character in the game. Two, she was sympathetic to polarizing figures like Anita Sarkeesian who fight for social justice and gender equality, especially in the gaming industry. Three, she admitted at one point that she was not a Mega Man fan. (Mighty No. 9 is a spiritual successor to the Mega Man series.)

The entire situation resulted in a twenty-minute-long YouTube video outlining the reasoning behind much of the vitriol.

Some are referring to the entire situation as just another instance of misogyny in gaming culture – backers and pundits included.

For all the yelling and hooting there is about Dina’s supposed feminist agenda, all there is to see here is the anti-feminist agenda of a few, loud and very vocal individuals who might benefit from remembering what their parents told them about being “respectful and considerate.” – If their parents indeed did tell them. With some people, you never know.Ian Miles Cheong, Gameranx

Others are sharing concerns over her role as a contributing artist in the game’s development cycle. Some even call her a flat-out liar, and some are calling for refunds.

Regardless of where you land in the conversation, the entire situation is extremely unfortunate as it has pulled focus away from where it should be: the game itself.