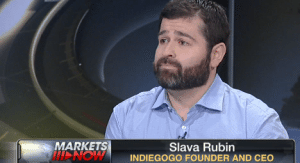 Indiegogo Founder and CEO Slava Rubin appeared on Fox Business recently to discuss the recently-proposed rules for Regulation A+. Due to equity crowdfunding’s cap (set at $1 million) and Regulation A+’s logical “floor” of $5 million, there is a gap. Regulation A+ arose from underutilization of Regulation A. Many are calling for a raise on the cap of equity crowdfunding campaigns under Section 4(a)(6), but it is unlikely that we will see any drastic changes from the SEC’s proposed rules unless public comments and associated data supporting such a move are overwhelming.

As always, Rubin is vague on how much Indiegogo has raised to date. “Hundreds of millions” didn’t garner any dissent from Rubin, though. Rubin does say that Indiegogo is dispersing millions of dollars in funding worldwide every week. Watch below….