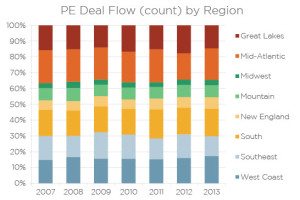 As should come as no surprise California leads the charge in private equity deals over 2013 according to a report in PitchBook.  California saw 272 PE deals through 2013 and has in fact led over the past 6 of the 7 years.  The state of Washington had 48 with Oregon in third at 23.

As far as regions go for all PE deals in the United States for 2013.

As clarified in the PitchBook posting, mega-buyouts like Heinz in the Mid Atlantic and Dell in the South skewed the data to some degree.

The entire report may be viewed here.