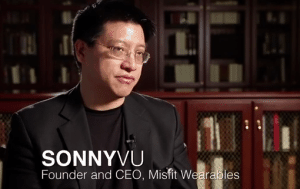 Misfit Wearables CEO Sonny Vu recently spoke at Seattle Pacific University, and as a part of his visit he sat down and was interviewed about his experience in running Misfit Wearables. He shares revelations including the fact that Misfit had VC backing before they launched the Misfit Shine, which would go on to successfully raise over $800,000 on Indiegogo. Vu and his team were (and still are) working on a project called “The Mars Project” and were venture funded for that endeavor from the likes of Peter Thiel and Founders Fund. They saw an opportunity in wearable tech and jumped on it, and it turned into a hugely successful project.

I felt pangs of sticker shock when I heard Vu state that Misfit Wearables spent $20,000 on their pitch video for Indiegogo. Vu calls it some of the best money they ever spent, because the video went on to go viral and spur their growth. Their crowdfunding campaign was fully-funded within hours. They saw that $20,000 come back many times over.

This is just one example of a slew of really valuable insights Vu shares in the series. I highly recommend it. The entire video series is embedded below…