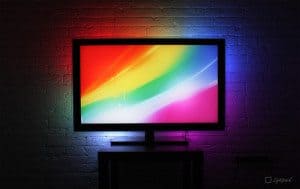 This is a pretty cool product that offered up a pretail crowdfunding camaign on Kickstarter almost a year ago.  Lightpack is an ambient backlight system for your display.  Best thing to do is watch the pitch video and you will get it, but in brief the developers created a series of integrated LED lights that you could connect to your HD TV or computer screen and create awesome visual effecst with extended lighting that matched the picture on your display.  Perfect for a mini room-rave, some serious FPS gaming or your favorite action / adventure movie.

A goal of raising $261,962 was set but it was easily beat and the campaign closed at just over $500,000 with 5812 backers hopping on board to support the project.  Backers received an early iteration of the device at an easily attainable $60.  The project was really a crowdsourced effort as the team was global in nature with the lead based in Russia.

Well now with most of the rewards fulfilled, Woodenshark – the team that created this product – is now shifting to retail to sell to anyone – anywhere.

In reviewing backer comments there still seem to be some bugs that need to be ironed out.  The product does not appear to be exactly plug & play but a vibrant discussion has cropped up to aid those who are challenged by others who have been more successful.  Organizers have even created a subreddit to continue the discussion while sharing experiences with the product.

I reached out to Olga at Woodenshark and she indicated they are working with everyone who has questions and that satisfying their Kickstarter backers is their first priority.

Definitely another creative project funded by Kickstarter.  Now – can I get this pre-installed on my next television?