It may have reached its goal of $50,000 through its crowdfunding campaign on Kickstarter, but it seems the Jet-Getters’ developer tinyBuild may have found an investor afterall. While the project will move forward and spend time bringing those partners up to speed and hiring additional people, this means there

would be more development time.

Instead of keeping the money and delaying the game, Jet-Getters’ production team decided to cancel the campaign. According to the games’ Kickstarter page, “The main reason for this is because we feel strongly that if we promise something, we better damn well deliver on it and with the few month delay we won’t be able to deliver Jet-Getters this year.”

It continued, “We have a reputation to uphold and don’t want to be lumped in with all the other kickstarters that have been delayed and or abandon. Being up front and honest about everything is always what we strive for.” 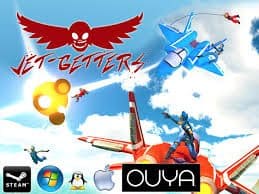 All of Jet-Getters’ backers will be not only have their money refunded, they will also be rewarded with all seven of the developer’s games. The games will have a $51 value that everyone receieves, regardless of how much they donated.

Jet-Getters is scheduled to be relased on Steam and Ouya in 2015.