With just a few hours until its campaign is closed, Underground Games’ new boardgame Allegiances: A Realm Divided made $50K plus during its time on the crowdfunding giant Kickstarter. The game is a “fantasy-themed, tabletop board-game/card-game of strategy and tactics, where players assume the role of powerful warring heroes.”

In Allegiance, each player takes on a role as one of the 10 powerful heroes fighting ina realm that is dealing with war and struggles. Each hero is representing a different character class and are played according to the style, strength and weaknesses. The players can customize and level up the hero’s abilities, join allied units and play action cards to defeat enemies they cross paths with.

Underground Games noted, “First and foremost, we wanted the game to be fun. People have lots of different ideas about what makes a game ‘fun,’ but for us, it means interactive, back-and-forth games, where players can always be involved in a positive way and have a chance to win. We get really frustrated in games where a player feels like they don’t have control over their own fate, so we worked to eliminated scenarios where players are taken out of a game due to the factors they can’t control.” 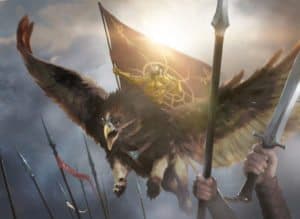 “In Allegiance, you can’t get sidelined by unlucky rolls of the dice, or by drawing an unusual hand of cards. As a result, each player has a chance to win, and it’s up to their skill and tactics to determine their fate. We also made sure that Allegiance is fun to play with any number of players. While some games require you to pass a certain threshold of players before they realize their full potential, we made sure Allegiance is just as fun with 2 players as it is with 4.”

Boardgame review website BoardGameQuest stated, “All-in-all, Allegiance: A Realm Divided appeared to be a great entry to the strategic card game genre and I look forward to check out the final, published version.”

Underground Games was seeking for a grand total of $50k to continue its work and to hopefully be able to bring the game to the market as soon as possible. Luckily for the company, the campaign brought in a grand total of $74,998 dollars with 913 backers.