The company is the first in Michigan to raise funds under MILE, also known as PA264 of 2013, which uses an investment model of crowdfunding rather than a rewards based model like Kickstarter.

“The difference between a Kickstarter campaign and a Michigan Investment Crowdfunding campaign is that supporters are also investors, and have the opportunity to receive a financial return on their investment” said

Chris Miller, City of Adrian economic developer, who was intimately involved in the introduction and passage of the legislation.

Tecumseh Brewing Company cofounders Kyle DeWitt and Tim Schmidt were less than half way through their 90 day campaign when they hit their maximum raise amount. Under Michigan law, businesses must set a minimum and maximum amount they will raise, based on the business plan and their individual financial package. Tecumseh Brewing set a minimum of $150,000 and a maximum of $175,000. “We are thankful for all of the support that everyone has shown over the past couple months. We can’t wait to open so that we can show everyone our appreciation by brewing great beer and becoming part of the craft beer culture in Michigan” DeWitt said in announcing they had achieved their goal.

The campaign was supported exclusively by Michigan investors, both “accredited” – high net worth investors; about 3% of the population, and “non-accredited” investors, the other 97% of the population. Over 100 investors took the opportunity to go online and examine the details of the investment, and many more had individual conversations with the company founders. The company hosted two events for potential investors, with over 100 individuals attending and examining plans for the micro-brewery and restaurant. The investment group totaled 21 separate investors, with investments as low as $250. Investors were largely from the Tecumseh and Ann Arbor area.

The co-founders of Tecumseh Brewing managed their fundraising campaign on Localstake, an investment crowdfunding website and portal which is the first such company to operate in Michigan under MILE. The firm is managed by investment professionals who determined they wanted to be involved in the movement to local investments, where citizens have the opportunity to invest in local and regional

businesses. Their company has been nationally recognized and has been featured on CNBC and Entrepreneur. Localstake cofounder Kevin Hitchen had this to say about the Tecumseh Brewing Company raise: “Tecumseh Brewing’s successful fundraising effort shows the impact that the new crowdfunding legislation can have on Michigan businesses. Our vision is to make this success story a catalyst for many more Michigan companies to access the funding they need to start and grow.”

The investment crowdfunding bill was introduced in September 2013 by Representative Nancy Jenkins from Lenawee County, and sailed through the 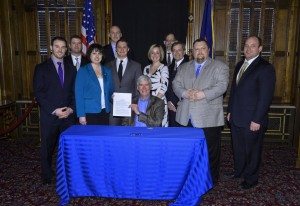 Michigan House and Senate with a single no vote, and in just four months was introduced, debated, approved, and signed by Governor Snyder. The law made Michigan only the fourth state to have an investment crowdfunding mechanism, and only the second state to accomplish this legislatively. Since passage of the bill two more states, Maine and Indiana, have passed investment crowdfunding laws, with Indiana modeling their law after Michigan’s.