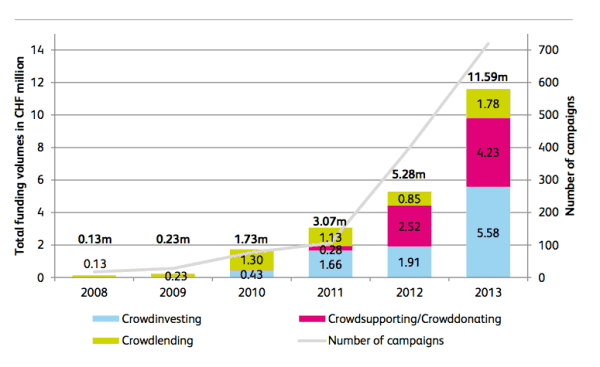 The Lucerne University of Applied Sciences and Arts has published a report on crowdfunding for Switzerland.  The research was produced by Prof. Dr. Andreas Dietrich and Simon Amrein in concert with the Institute of Financial Services Zug IFZ.

The document indicates that for 2013 CHF 11.6 million (Over 13 Million USD) was collected via crowdfunding, an increase that is more than 2x the amount in 2012 which is estimated at CHF 5.2 million.  The most dramatic growth was from investment crowdfunding, including both debt and equity.  Expectations are for crowdfunding volumes to double in 2014 to over CHF 24 million

In 2013 720 campaigns were funded on 14 different crowdfunding platforms.  Out of a total of 1125 campaigns exhibiting a 64% success rate.  Donations based remain the single largest category in number of campaigns growing from 331 offerings to 594 in 2013.  From the investment side, 10 equity offerings were

successful in 2013 but the funding total stood at CHF 5.58 million showing a dramatic difference in the ratio of number of campaigns to funds raised.

The Swiss market is a small but affluent region that is still in the very early stages of crowdfunding development.  The estimated % of GDP stands at o.oo2% in contrast to the UK which is estimated at o.o58%.

The young industry still does not have a formal regulatory approach to crowdfunding as the Swiss Financial Market Supervisory Authority (FINMA) has engaged in individual agreements with platforms.  Expectations are that regulators will begin taking a closer look as the new financial sector grows. 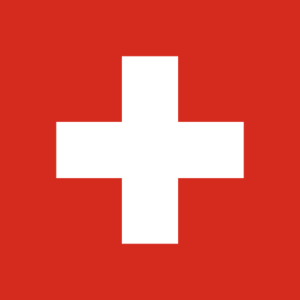 The Institute of Financial Services Zug IFZ of the Lucerne School of Business is a leading finance institute among the Swiss universities of applied sciences.

The document is available for download in both German and English.