Last week, “Daily Show’s” Jon Stewart announced the “launch” of his $10 billion Kickstarter campaign to buy CNN from Time Warner before famed billionaire Rupert Murdoch gets his hands on it. 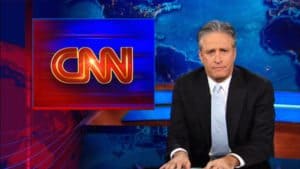 Murdoch has been unable to purchase the company so far, it has been revealed if the deal is successful, Murdoch would have to sell off CNN to avoid regulatory problems. With that said, Stewart urged all viewers to go to the website Letsbuycnn.com to contribute to the “cause” of purchase the network.

According to the Hollywood Reporter, the website mimics a Kickstarter page, though without allowing users to actually give towards the goal. The page reads, “IF RUPERT MURCHOCH BUYS TIME WARNER, CNN WILL BE FOR SALE! SO LET’S BUY IT AND AND… DO SOMETHING WITH IT. WE’RE NOT SURE WHAT YET.”

“CNN, America’s first 24-hour cable news network, has been terrible for many, many years. Does it have to be that way? Who knows, maybe it does. So let’s find out for ourselves”

“This $10 billion, all-cash bid for CNN would secure control of a massive television network reaching over 100 million homes in the US alone, which we could then use to rebuild a news organization befitting this proud land. Or more likely we’d use it to make a lot more poop jokes. Either way, you get to watch!

Although it is not actually on the crowdfunding giant’s platform, the hilarious talk show host announced that the campaign has reached over $150 billion. Stewart admitted, “Can I tell you something? Our fake Kickstarter to buy CNN is up to $150 billion now. When we charge their credit cards I have a feeling we’ll be disappointed.” 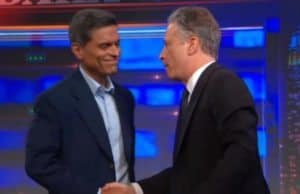 Just one day after Stewart created the campaign on LetsBuyCNN.com, he took to the stage with CNN reporter Fareed Zakaria, who hosts “Fareed Zakaria GPS.” During the interview, Zakaria stated, “I’m a little nervous because I realize I might be speaking to my future boss. I hope that you end up getting CNN. I think it would be a fascinating challenge for you.”

Stewart then remarked that he plans to fill some of the remaining airtime was to “just Wolf Blitzer fill in.”