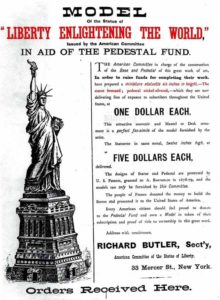 The story about Joseph Pulitzer, the famous New York newspaper publisher, raising funds to secure the pedestal for the Statue of Liberty is quite well known in crowdfunding circles.  Many industry leaders and pundits like to use the Statue of Liberty as an acute example of crowdfunding evolution.  As the history goes, New York was short on raising the needed funds to put up the Statue of Liberty – recently gifted by France.  The New York Governor at the time, Grover Cleveland, refused to use  funds to pay the way.  Several other cities quickly stepped up to offer their community as a welcomed home for what everyone knew (except ole Grover who eventually became President) would become an iconic monument.  Pulitzer, fearing the loss, quickly used the technology at the time – ink and paper – to raise or crowdfund the shortfall.  To make a long story short he was successful and the Statue of Liberty guards the shores of New York City today.  This act by Pulitzer will probably be his most auspicious addition to American history books.  Also – Kickstarter noted that for a one dollar contribution, backers received a 12″ statue replication of Lady Liberty – a pretty nice reward.

So crowdfunding as a concept is NOT new.  What is new is applying the technology – the internet – to the process.  Allowing interested supporters from around the globe to support any project , anywhere – as long as they see merit in the objectives.

Kickstarter shared a few other historical examples of “early” crowdfunding back in July so if you are looking for more – head on over to read for yourself.