While video games continued to be a huge hit on the crowdfunding giant Kickstarter, it seems not everyone believes that the category is actually as successful as it seems. Despite the platform helping game developers raise $57,934,417.74 in 2013, UK-based firm ICO Partners revealed that the gaming campaigns have struggled this year.

According to the company, a study conducted by analyst Thomas Bidaux, revealed that, if doubled, 2014 numbers aren’t nearly as close to 2013, which was considered the “best year so far for video games and crowdfunding.” The company noted that the platform went from having 446 funded projects in 2013 to 175 funded project for 2014’s first half. Projecting for a similar number of projects in the second half, it would mean that there were only 20% fewer funded projects in 2014. While this is a “decline certainly,” it is not considered a terrible collapse.

It was noted, “Of course, looking at total amount of money pledged might be a bigger concern. 2013 saw $58m pledged towards video games where the first half of 2014 stands at $13.5m. If 2014 second half is comparable (something that is not easy considering you need a similar number of big hits), 2014 would be less than half of what 2013 has been… A sobering consideration.” 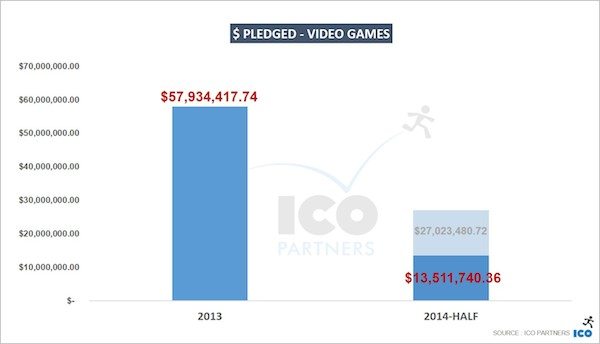 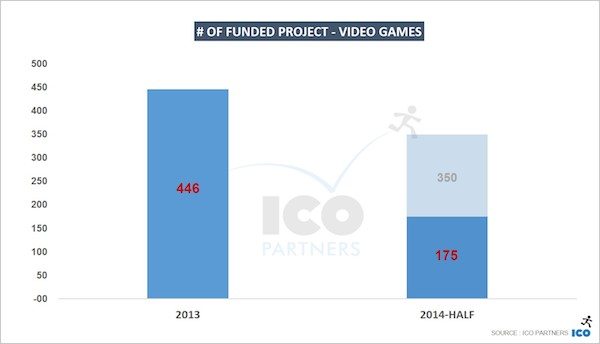 Bidaux stated,“The vast majority of the Kickstarter video game projects are PC-based and when you consider the amount of work required to get a project funded on Kickstarter, compare it to the relative ease to go to Early Access in comparison, and add to that the fact that on Early Access the funding doesn’t stop after one month, I suspect a lot of Early Access successes skipped the crowd funding phase to go directly to alpha funding. I personally chalk that up to people abusing the kickstarter system and the kickstarters being over saturated with extremely mediocre and bad ideas for games.”

Bidaux also noted that there’s more of a competition to raise gaming funds than there ever was. “Another big factor to take into account is the appearance of Early Access on Steam. The vast majority of the Kickstarter video game projects are PC-based and when you consider the amount of work required to get a project funded on Kickstarter, compare it to the relative ease to go to Early Access in comparison, and add to that the fact that on Early Access the funding doesn’t stop after one month, I suspect a lot of Early Access successes skipped the crowd funding phase to go directly to alpha funding.”

“I cannot fault them – Early Access is a great opportunity for developers as well. Not entirely incompatible with a crowd funding campaign, it can still prevail because the amount required is not as important. Especially with the current trend where projects do need at least a playable demo to get a chance to get funded. If you have a playable, why not go directly to Early Access? I see a lot of added value for a crowd funding campaign still – it is a catalyst, it gives drive to your fans to talk about your project a lot in a limited time frame, it forces you to think about your project differently and learn how to communicate on it – but it is not a solution that is good for every project.” 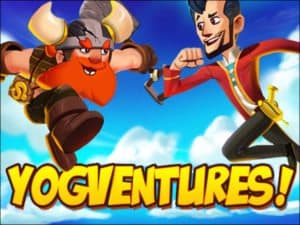 He then added, “Comes 2014, and people are not impressed anymore by the model. It has its shares of failures (Clang, Yogscast) that skeptics like to throw around (rightfully so sometimes), but I also think it has reached a maturity point. I am definetely a crowd funding enthusiast – I am supporting a fairly large number of projects. But I support those projects with expectations that I think are right: not all projects backed will be good, not all of them might come out, but all of them have something that makes me want them to succeed and support them in that process. I hope that this view of crowd funding is getting more and more prevalent among the backers – more so than the “it is just like a pre order” mentality.”
Sponsored Links by DQ Promote