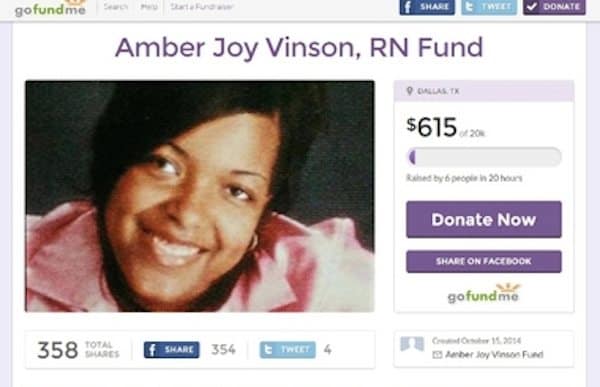 Earlier this week, Amber Vinson, one of the Texas nurses that was treating Ebola patient Thomas Duncan, traveled between Dallas, Texas and Cleveland, Ohio before finding out she was positive for the virus. The situation grabbed public attention and caused total chaos in the Cleveland and Akron areas, where she had reportedly stayed for several days before returning to Texas. 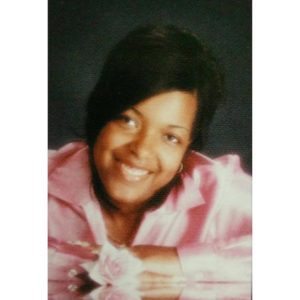 As information continues to surface as to where Vinson went throughout her visit, more and more people become more supportive of her, which caused a situation on GoFundMe. According to one of Cleveland’s local media outlets, the city’s division of the Better Business Bureau issued a warning Thursday (October 16th) about a campaign that purported to be collecting on behalf of Vinson.

One of Vinson’s relative stated that the campaign on the platform was not sanctioned by either her or the family. After receiving this information, the BBB contacted GoFundMe and immediately had the campaign shut down. The appeal had been shared hundreds of times on Facebook and may have raised more than $600 before it was removed.

Meanwhile, a GoFundMe campaign for the other Texas nurse that was diagnosed with Ebola, Nina Pham, has now raised over its initial $70,000 goal, thanks to 1,503 backers. Yahoo! News shared that one of Pham’s childhood friends, Sarah Strittmatter, launched the campaign Tuesday (October 14th). 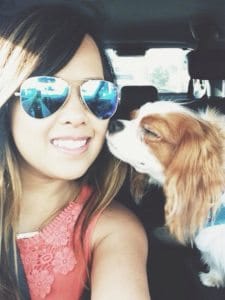 Strittmatter stated on the campaign’s website,”To those who know her she is a light for others, always shining, never faltering. She is genuine, selfless, and a true friend. She loves adventures, traveling, helping others, and a good challenge. She sees beauty in so many things, and believes in and supports others with a ferocity that is unforgettable. Her life has been an inspiration to those around her. So many have been touched by her life, her genuineness, her indomitable spirit, and her love.”

“This fund will be used for many different expenses that Nina and her family will need covered.  Everything Nina owns has been destroyed in effort to avoid any contamination.  Also, her family is not working during this crisis, and needs support during this tough time. There are a myriad of expenses associated with a crisis like this – many of them not covered under any compensation plan. Student loans, car payments, rent, vet bills, family travel and hotel fees, meals, etc.”