Following in the footsteps of the Burrito Bond, we now have a beverage to go with that security.  A “Coffee Bond” offering has hit the pages of investment crowdfunding platform Crowdcube where Taylor St. Baristas are seeking to raise £1.5 million in capital for company expansion plans.

The 4 year security will yield a solid 8% per year OR the investor may choose to receive a 12% fixed gross per annum in store credit creating a unique hybrid offering.  Bond payments are semi-annual and a £500 minimum is required.  As of this writing over 55 investors have quickly signed up to invest over £100,000 with 56 days remaining in the funding round.

Taylor St. Baristas has a passion for coffee.  Since opening up their operation in 2006 the firm claims to be “at the forefront of the specialty coffee revolution in London.  The Baristas state that each cup of coffee is made to the “exacting standards of their Head of Coffee and World Barista Championship judge” co-founder Andrew Tolley.  Of course they only use the world’s finest coffees.

Taylor St Baristas now boasts 9 locations including Mayfair, Canary Wharf, Shoreditch and Brighton and they serve over one million cups of coffee each year.  The company is planning to open up additional shops, expand retail partnerships and boost their brand.  Retail partnerships are already in place with Tesco and Harris and Hoole, which has already opened 25 cafes since August of 2012.  Their highly trained Baristas is the envy of other cafes and they see an opportunity to broaden their training program as another revenue stream

Help spread the gospel of specialty coffee. Invest and earn 8% in the @Taylor_St #coffeebond #capitalatrisk #ad 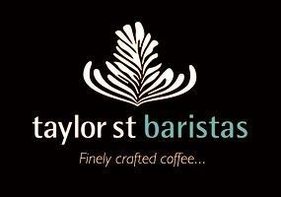 The UK coffee market is estimated to have annual sales of over £6 billion. In 2009, one in nine UK consumers visited a coffee shop daily; now it’s one in five. The specialty coffee market is growing fast with quality artisan and branded coffee chains adding over 300 cafes in 2013 alone.

Taylor St. Baristas explains their service the best by declaring, “the first time you have a really good coffee can be a bit of a curse.  With one sip your expectations are radically transformed.  All other coffee is ruined for you.  Coffee shops that used to prop up every corner of every city block soon revealed themselves to be mere pretenders.” 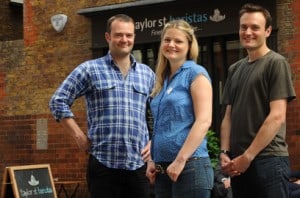 The young business was founded by siblings Nick, Andrew and Luara Tolley – hailing from Australia.  They were soon joined by Richard Shaer to “complete the coffee loving team”.

This will be the fourth mini-bond offering for Crowdcube.  The other three were quickly funded.  The jump from the start is a good indicator for Taylor St Baristas. Starbucks look out.

Aussie siblings Nick, Andrew and Laura Tolley founded Taylor Street in 2006. They were joined by Richard Shaer to complete the coffee loving team.