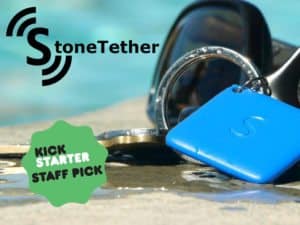 Del Marth LLC, the manufacturers of StoneTether, a new wireless tracking device, has experienced staggering success crowdfunding on  Kickstarter.  The campaign launched with a goal of  only $15,000 but closed over $366,000 as nearly 7000 backers helped to fund the project.

As previously reported, StoneTether is a micro-device that provides improved distance with a tracker that is about the size of a quarter. As you would expect, the product works with it’s own smart-device application covering both iOS and Android users.

Similar to other devices, the app gives StoneTether owners the ability to track items that are lost and tethering functions that prevent you from being separated from items. However, the main focus of the tethering aspect of the StoneTether system is the ability to warn if children stray beyond set distances by parents. Co-founder of Del Marth LLC, Ehrien Marth stated,

“The tethering function is especially useful for parents who are at a busy event and need to keep track of their kids; a situation I have been in quite a few times myself.” 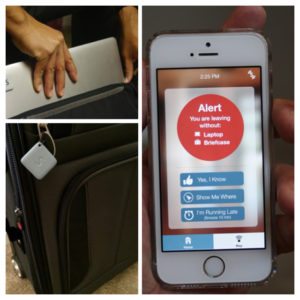 A new spin on item tracking is that StoneTether provides users a novel approach for items that users want to bring to an event on their calendar. Customers are able to add items attached with a StoneTether device that they want or need to bring to any event on their calendar. If the user leaves for an event or trip without a StoneTether they have attached to luggage, computer, medication, etc., they immediately get a notification and alert that they have forgotten the specific item(s). Co-Founder Mike Walton added, “We wanted to create not just a ‘where are my keys’ device, rather something that just makes people’s busy lives a bit easier.”

Massive public support has resulted in raising over 2,400% of the requested goal from backers.  According to the company pre-orders for the product have exceeded all forecasted expectations.

Marth commented, “We are grateful, astounded and humbled by our Kickstarter supporters. We cannot wait to get StoneTether into everyone’s hands. Anyone who has ever lost their keys, purse or wallet – Anyone who has ever been concerned with losing sight of their children while in public or been fearful of their pet accidentally running off will feel a sense of security and peace of mind that StoneTether provides.”