Ready to bring the second generation of ZBoards to the market, San Fransisco entrepreneurs Ben Forman and Geoff Larson have launched a crowdfunding campaign on Indiegogo for the ZBoard 2. Originally seeking $50,000 the product quickly surpassed its initial goal and raised over $94,000 in less than two days. 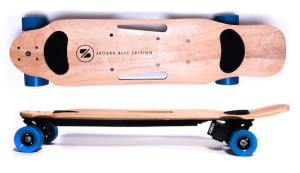 According to Uber Gizmo, ZBoard was first introduced to the crowdfunding method in 2012 when Forman and Geoff took to Kickstarter for the project. By the end of its run, ZBoard raised $278,767 from 425 backers.

Nearly three years later, ZBoard 2 is being introduced on Kickstarter’s competitior as the lightest, fastest, longest running weight-sensing electric skateboard to ever hit the market. Forman and Larson noted that after the user’s first ride, they will realize that there is nothing else in the world quite like it and added, “Even if you’ve never ridden a skateboard before, the ZBoard’s intuitive control will have you carving in no time with its weight-sensing foot pads.”

ZBoard 2 comes in two models: The Blue Edition (16 miles/charge, 16lbs) and Pearl Edition (24 miles/charge, 18lbs). The team shared, “With a range that is two, three, or even four times the range of other electric skatebaords on the market, the ZBoard 2 will have you riding without any concern of running out of juice.”

The features of the ZBoard 2 also include: