Ready to create a third installment of the popular board game series, Arizona-based Eagle Games has launched a campaign on crowdfunding giant Kickstarter for Age of Empires III. 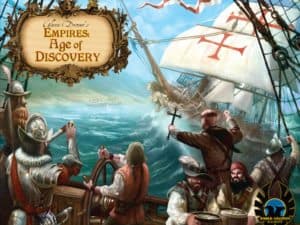 Sharing the history of the board game, the Eagle Games team stated, “Age of Empires III (2007, Tropical Games) is one of the first and still one of the best worker placement board games of all time.  It has been out of print for 7 years now, prompting many fans and reviewers to call for a new reprint of the game.

“When the rights to the game were purchased by Eagle Games, the expense of license renewal of the name from Microsoft proved to be too much, so the game was re-christened Glenn Drover’s Empires: Age of Discovery (EAOD), but never reprinted.

“Early in 2014, Eagle Games asked for volunteers from the BGG community, who really admired the game and who had played it many times, to work with the designer, Glenn Drover, and the CEO of Eagle Games, Rick Soued, to envision what a new, Deluxe version of AoE III might look like and to help them implement it.  After nearly a year of work, culminating last month in the NEW rule book, that envisioning process was complete.” 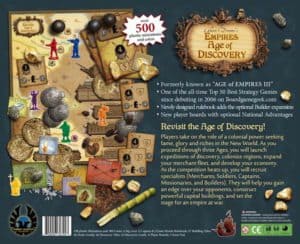 The board game includes:

Revealing the reason behind the campaign, the team added, “The purpose of this Kickstarter is to transform our vision and that of our Committee, and the vision of the many admirers of this game, into the reality of Empires: Age of Discovery, the Deluxe Edition.”