With the new documentary Billion Dollar Bully continues to remain success on crowdfunding giant, Kickstarter (by raising its initial $60,000 goal), Prost Production producer, Kaylie Milliken sat down to share details about the new project and her slightly awkward interview with CNBC’s First Money. 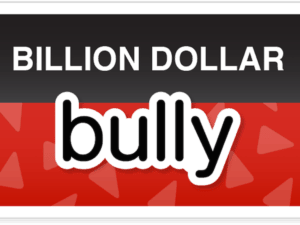 As previously reported, Billion Dollar Bully is “a documentary on marketing giant Yelp’s $3.6 billion racket against small business owners.” It investigates the website’s past, along with business owners accusing it of extortion, manipulation and fabrication.

Sharing Yelp’s side of the story, a spokesperson told Business Insider: 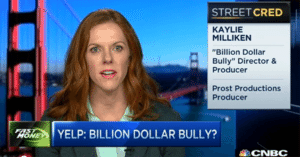 Milliken made an appearance on Fast Money earlier this week to discuss the documentary, which is set to expose Yelp. The reviewing website’s VP of Corporate Communications, Shannon Eis clashed with Milliken on the show about the film’s information, including which studies are being used.

During her interview with the Observer, Milliken noted that Yelp seems to be very threatened and extremely concerned about the documentary. She also discussed the interview and the information that was revealed: 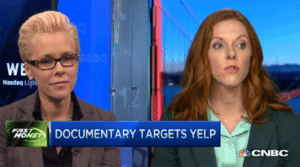 “I have gotten a huge reaction from [Yelp], which I have to admit, I was not expecting. They’ve been aggressively denying it and trying to discredit my character and the film itself. They sent in this person to discredit me and I’m just so surprised. I mean, we’re raising money on Kickstarter to do this indie documentary. I have a lot of questions for them, and if they don’t have anything to hide, they should be open to having an open discussion about each point.”

Although she is no longer a Yelp user, Milliken stated Yelp’s comment about her trying to sway consumers from the site is clearly false. She’s just wanting to investigate their business practices and confirm the past accusations. 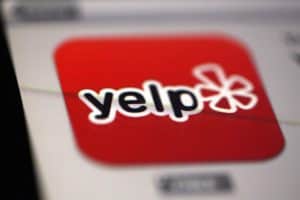 Milliken also shared that she has interviewed attorneys of those who have brought cases against Yelp and business owners that have evidence that back their claims. During the filming of the documentary, she plans to examine the cases, the court rulings, and why the reviewing website has won each case.